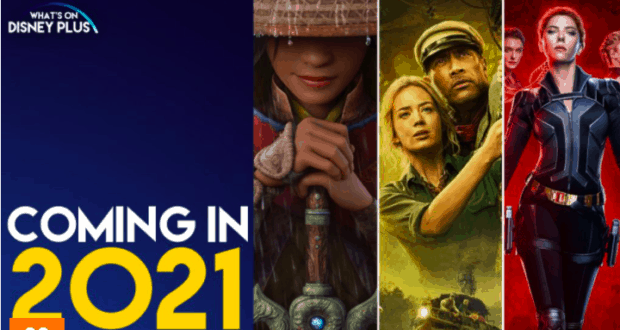 Grab Your Popcorn for these Disney Movies Coming in 2021.

As we wrap up 2020 a year where many cinemas closed and movies were postponed, we can look forward to 2021 and the movies coming to the theaters. Take a look at these great movies coming to cinemas in 2021.

Following the economic collapse of a company town in rural Nevada, Fern (Frances McDormand) packs her van and sets off on the road exploring a life outside of conventional society as a modern-day nomad. The third feature film from director Chloé Zhao, NOMADLAND features real nomads Linda May, Swankie and Bob Wells as Fern’s mentors and comrades in her exploration through the vast landscape of the American West.

RAYA AND THE LAST DRAGON – March 5, 2021 (Theatrical and Disney+ with Premier Access)

Walt Disney Animation Studios’ “Raya and the Last Dragon” travels to the fantasy world of Kumandra, where humans and dragons lived together long ago in harmony. But when an evil force threatened the land, the dragons sacrificed themselves to save humanity. Now, 500 years later, that same evil has returned and it’s up to a lone warrior, Raya, to track down the legendary last dragon to restore the fractured land and its divided people. However, along her journey, she’ll learn that it’ll take more than a dragon to save the world—it’s going to take trust and teamwork as well.

As a collection of history’s worst tyrants and criminal masterminds gather to plot a war to wipe out millions, one man must race against time to stop them. Discover the origins of the very first independent intelligence agency in “The King’s Man.” “The King’s Man” is directed by Matthew Vaughn and stars Ralph Fiennes, Gemma Arterton, Rhys Ifans, Matthew Goode, Tom Hollander, Harris Dickinson, Daniel Brühl, with Djimon Hounsou, and Charles Dance.

Twentieth Century Studios and Locksmith Animation’s “Ron’s Gone Wrong” is the story of Barney, a socially awkward middle-schooler and Ron, his new walking, talking, digitally-connected device, which is supposed to be his ‘Best Friend out of the Box.’ Ron’s hilarious malfunctions set against the backdrop of the social media age, launch them into an action-packed journey in which boy and robot come to terms with the wonderful messiness of true friendship.

In Twentieth Century Studios’ epic adventure-comedy “Free Guy,” a bank teller who discovers he is actually a background player in an open-world video game, decides to become the hero of his own story…one he rewrites himself. Now in a world where there are no limits, he is determined to be the guy who saves his world his way…before it is too late. Starring Ryan Reynolds, Jodie Comer, Lil Rel Howery, Joe Keery, Utkarsh Ambudkar and Taika Waititi, “Free Guy” is directed by Shawn Levy from a screenplay by Matt Lieberman and Zak Penn and a story by Lieberman.

Disney’s “Cruella,” an all-new live-action feature film about the rebellious early days of one of cinemas most notorious – and notoriously fashionable – villains, the legendary Cruella de Vil. “Cruella,” which is set in 1970s London amidst the punk rock revolution, follows a young grifter named Estella, a clever and creative girl determined to make a name for herself with her designs. She befriends a pair of young thieves who appreciate her appetite for mischief, and together they are able to build a life for themselves on the London streets.

Set in a beautiful seaside town on the Italian Riviera, Disney and Pixar’s original feature film “Luca” is a coming-of-age story about one young boy experiencing an unforgettable summer filled with gelato, pasta and endless scooter rides. Luca shares these adventures with his newfound best friend, but all the fun is threatened by a deeply-held secret: they are sea monsters from another world just below the water’s surface.

Marvel Studios’ “Shang-Chi and The Legend of The Ten Rings” stars Simu Liu as Shang-Chi, who must confront the past he thought he left behind when he is drawn into the web of the mysterious Ten Rings organization. The film also stars Tony Leung as Wenwu, Awkwafina as Shang-Chi’s friend Katy and Michelle Yeoh as Jiang Nan, as well as Fala Chen, Meng’er Zhang, Florian Munteanu and Ronny Chieng.

Thrust on an epic quest together, the unlikely duo of Dr. Lily Houghton and skipper Frank Wolff encounter innumerable dangers and supernatural forces, all lurking in the deceptive beauty of the lush rainforest. But as the secrets of the lost tree unfold, the stakes reach even higher for Lily and Frank and their fate—and mankind’s—hangs in the balance.

From 20th Century Studios and New Regency, Ben Affleck (“Gone Girl”) and Ana de Armas (“Knives Out”) star in the psychological thriller “Deep Water” from director Adrian Lyne (“Fatal Attraction,” “Indecent Proposal”). Based on the celebrated novel by famed mystery writer Patricia Highsmith (The Talented Mr. Ripley), “Deep Water” takes us inside the marriage of picture-perfect Vic (Affleck) and Melinda (de Armas) Van Allen to discover the dangerous mind games they play and what happens to the people that get caught up in them.

Acclaimed filmmaker Peter Jackson’s “The Beatles: Get Back” is a unique cinematic experience that takes audiences back in time to The Beatles’ intimate recording sessions during a pivotal moment in music history. The film showcases the warmth, camaraderie and creative genius that defined the legacy of the iconic foursome. Shot in January 1969 and compiled from over 60 hours of unseen footage (filmed by Michael Lindsay-Hogg) and more than 150 hours of unheard audio, all of which has been brilliantly restored, “The Beatles: Get Back” is the story of John Lennon, Paul McCartney, George Harrison and Ringo Starr as they plan their first live show in over two years and charts the writing and rehearsing of 14 new songs, originally intended for release on an accompanying live album.

Based on the 1937 novel by Agatha Christie, “Death on the Nile” is a daring mystery-thriller directed by Kenneth Branagh about the emotional chaos and deadly consequences triggered by obsessive love. Belgian sleuth Hercule Poirot’s Egyptian vacation aboard a glamorous river steamer turns into a terrifying search for a murderer when a picture-perfect couple’s idyllic honeymoon is tragically cut short. Set against an epic landscape of sweeping desert vistas and the majestic Giza pyramids, this tale of unbridled passion and incapacitating jealousy features a cosmopolitan group of impeccably dressed travelers, and enough wicked twists and turns to leave audiences guessing until the final, shocking denouement.

From Twentieth Century Studios and visionary filmmaker Ridley Scott comes “The Last Duel,” a gripping tale of betrayal and vengeance set against the brutality and female oppression of 14th century France. The historical epic, which is based on actual events depicted in The Last Duel by Eric Jager, stars Oscar winner Matt Damon and two-time Academy Award nominee Adam Driver as quarreling lords, both of noble birth, whose grievances must be resolved in a duel to the death.

Directed by Chloé Zhao, Marvel Studios’ “Eternals” welcomes an exciting new team of Super Heroes to the Marvel Cinematic Universe. The epic story, spanning thousands of years, features a group of immortal heroes forced out of the shadows to reunite against mankind’s oldest enemy, The Deviants.

Walt Disney Animation Studios’ “Encanto” tells the tale of an extraordinary family, the Madrigals, who live hidden in the mountains of Colombia, in a magical house, in a vibrant town, in a wondrous, charmed place called an Encanto. The magic of the Encanto has blessed every child in the family with a unique gift from super strength to the power to heal—every child except one, Mirabel. But when she discovers that the magic surrounding the Encanto is in danger, Mirabel decides that she, the only ordinary Madrigal, might just be her exceptional family’s last hope.