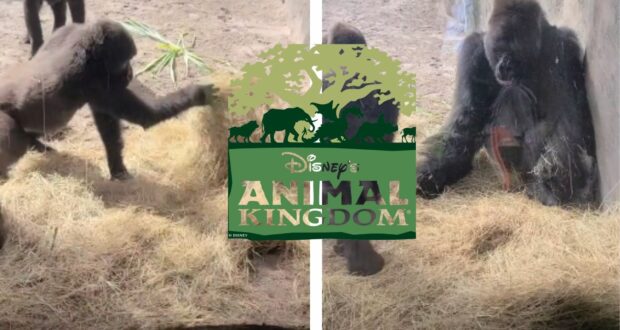 Most of us have some kind of welcome mat on our front porches, telling visitors that we welcome them into our homes, and we are happy that they’ve come to visit. But some visitors that come to our homes make us wish we had pulled up that welcome mat beforehand so they’d get the hint and not even ring the doorbell.

I wonder if that’s what was going through the minds of a troop of gorillas that were going about their day at Disney’s Animal Kingdom. A Guest at the park, who goes by the handle @sillystrokesurvivor, captured on video the moment when one of the gorillas noticed an unfamiliar visitor in the enclosure. 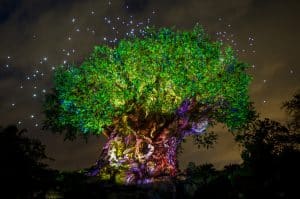 We first reported on this video over the summer, and since that time, it has continued its viral trend, now amassing a total of more than 3.1 million likes and nearly 17,000 comments, and it has been shared more than 73,000 times.

You haven’t seen it yet? Read on!

At the beginning of the video, the camera is focused on one of the gorillas, who is sitting alone. He even appears to be sad as he looks down to his right for several seconds without moving. But then he gets up and almost seems to call out to other members of the troop to come and see what he has found. Two or three more gorillas join the first one, and suddenly, they see a snake on the ground. 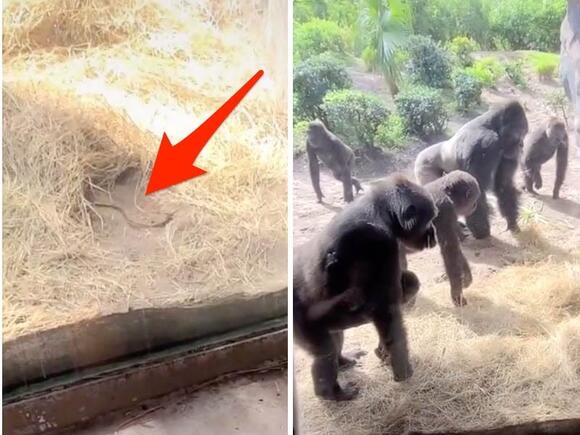 One gorilla swats at the ground where the snake is lying, and each of the gorillas has a look of curiosity on him–curiosity mixed with a determination to remind the slithering serpent that it is out of its jurisdiction. Just watch:

The gorillas clearly understand that the snake is a foreigner, and they don’t want it in their enclosure. You can even tell from how the gorilla, who looks to be the silverback or alpha, carries himself and walks over to where the snake is, that he wants to know who the visitor is and how fast it can leave. 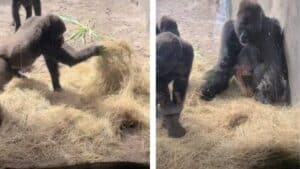 For a large part of the video, the gorillas either swat at the hay in which the snake is (probably) trying to hide, or they try to part the hay, looking for the slithery unwelcomed Guest. Leave it to the magic of Disney to bring an unexpected experience to an already stellar animal exhibit at Disney’s Animal Kingdom.

RELATED: Pumbaa, Baloo and others have it rough at Animal Kingdom’s new high-flying adventure

Have you had an experience at Animal Kingdom while viewing the animals that was different from what you expected? Tell us about that experience in the comments!

2021-11-05
+Becky Burkett
Previous: After Ruling That Disney Does Not Have to Pay a Living Wage, Many Are Encouraging Cast Members to Unionize and Strike
Next: Sports fans will say good-bye to ESPN Classic beginning January 1

‘Thanks, Disney World, for existing!’ Carrie Underwood, family celebrate Thanksgiving at the Most Magical Place on Earth

Seven-year-old boy wanted a Disney cruise, so he became one of the youngest entrepreneurs in the country

Retired ride vehicles, posters, even a bi-plane from Magic Kingdom attraction up for auction, but may be on exhibition where you live before that