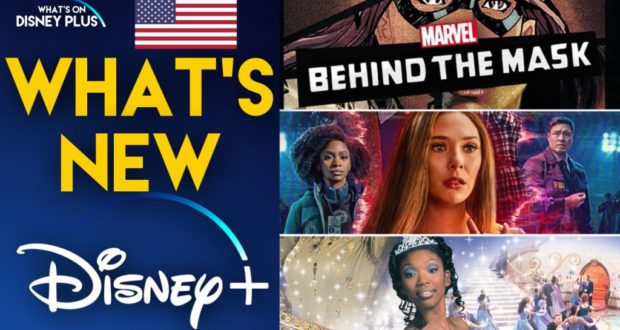 With winter in full force throughout the country, this weekend will be a great time to enjoy some popcorn and shows. Here is what is new on Disney+ this week.

Iron Man, along with Captain Marvel, Spider-Ham, Groot, and Throg, try to figure out what the Mad Titan Thanos wants and why they’ve been brought to this strange, new world.

Marvel’s Behind the Mask

Marvel’s Behind the Mask will explore the power of identity behind the world’s most iconic Super Heroes we know and love today.

From the very inception of comic books, secret identities have been an integral part of both Super Heroes and Villains leading “normal” lives. But it’s the characters beneath that resonate within us across generations of fans. Since the advent of the Marvel Age of Comics in the early 1960s, Marvel’s writers and artists have used the notion of identities to examine the evolving concept of equal rights. These legendary Marvel creations and stories have not only reflected the world outside our window – they have become a reflection of our own identities and who we truly are.

Marni, a successful woman, is shocked to learn that her brother is marrying the school bully from her past. When she tries to expose her, things do not go as planned.

A documentary series of personal and cinematic stories that provide an inside look into the people, artistry, and culture of Pixar Animation Studios.

In “Rodgers & Hammerstein’s Cinderella,” when Cinderella’s cruel stepmother prevents her from attending the Royal Ball, she gets some unexpected help from her Fairy Godmother. The 1997 movie was directed by Robert Iscove, written by Robert I. Freedman, and choregraphed by Rob Marshall. Whitney Houston, Debra Martin Chase, Craig Zadan, and Neil Meron served as Executive Producers. Chris Montan was a Producer and Robyn Crawford was an Associate Producer.

2021-02-12
Jennifer Retzlaff
Previous: Media Event for New Experiences at Disney Springs & Epcot
Next: Disney CEO Expects Mask Requirements Through 2021, But Not in 2022