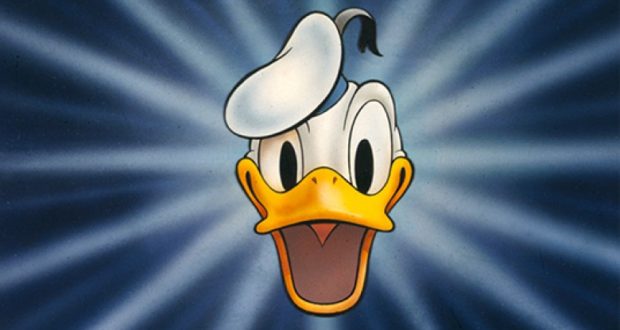 Move over, Mickey Mouse: today Donald Duck has the spotlight!  As one of Walt Disney’s classic characters, Donald Duck has delighted and entertained generations of fans with his hot-tempered nature, hilarious hijinks, and heart of gold.  In many ways, Donald is the antithesis of Mickey – they’re like the yin and yang of the animation world.  But how much do you really know about this loveable, irascible duck?  Here are some of our favorite fun facts about Disney’s Donald Duck.

That’s right, unbeknownst to most Donald fans, he is a twin!  His sister, mother to Donald’s nephews Huey, Dewey and Louie, goes by different names (she’s been referred to as Della, Dumbbells or Thelma, depending on the source).  She hasn’t been in the limelight as much as her famous brother, so we don’t know a whole lot about her, other than the fact that she exists.

The famous voice of Donald Duck was provided by just one person from 1934 until 1983: Clarence Nash, whose “duck voice” was actually the inspiration for the entire character.  When Clarence retired, he trained a Disney artist named Tony Anselmo to take on the characteristic voice.  Disney used a special microphone (the Neumann TLM-170) to capture and alter Donald’s voice, to make it easier to understand, and easier for actors to voice the role.

3. Scrooge McDuck is his Uncle

What else do we know about Donald’s family, besides his sister and his nephews?  Luckily, Carl Barks, the cartoonist who not only developed Donald Duck, but also created Scrooge McDuck, can shed some light on that.  In the 1950s, he did some work on Donald’s family tree, connecting it to the McDuck’s.  It turns out that Donald’s mom is a McDuck, who married into the Duck family, and Scrooge McDuck is her brother, making Scrooge Donald’s nephew.

We all know Donald Duck is a classic Disney character, but just how long has he been around?  Well, everyone’s favorite duck made his big screen debut almost 90 years ago, way back in 1934 (June 9th, to be precise) in a Silly Symphonies short called The Wise Little Hen.  Donald appeared beside his friend, Peter Pig, and the pair managed to avoid doing their share of work on the farm, and as a result, went hungry when the harvest came in and their hard-working hen friend reaped the results of her hard work.

We bet you didn’t know that Donald Duck is colorblind! Or so we think, based on the events of the 1942 short Donald Gets Drafted.  As the title implies, in the short Donald joins the army, which accepts him even though he identified a green card as blue.  Also noted?  The fact that Donald had flat feet and no brain.

In the same wartime short, the audience learned another delightful tidbit about Donald Duck – his middle name.  It’s “Fauntleroy”, which somehow is not at all what we expected.  However, rumor has it that no other Disney character has an official name, so at least Donald has that claim to fame!

Donald Duck is famous for his fiery temper, which often gets him into trouble.  Walt Disney conceived of him as a “problem child”; Walt wanted a character that could embody some negative characteristics, unlike perennially good-natured Mickey Mouse and Goofy, for instance.  Of course, Donald’s often hilarious imperfections made him relatable to just about everyone, and he became a favorite not only with animators but with audiences as well.

Even outside the realm of Disney, Donald Duck holds sway!  Did you know that Donald is a sports mascot?  That’s right!  He looks a little different than the Donald we know, because he wears green and yellow, but it’s definitely him.  The University of Oregon’s athletic program has a special license agreement that allows Donald to appear as the mascot for the Oregon Ducks.  That’s one multi-talented duck!

Donald’s famous temper has been part of his character for as long as we can remember.  In fact, if you watch the animated special This is Your Life, Donald Duck (or if you read the corresponding comic book), you’ll see that throwing a temper tantrum was the very first thing Donald ever did!  The tv special and comic book show Donald still in an egg, hatching and losing his temper at the same time.  Side note: while Donald was introduced on June 9, 1934, and this is the day that’s recognized officially as his birthday, we discover in The Three Caballeros and its spin-off that his true birthday is Friday the 13th – March 13th, that is!

2021-02-08
Stacy Milford
Previous: Official Trailer Released for “The Falcon and The Winter Soldier” Disney+ Series
Next: You Can Get a “WandaVision” Frappuccino from Starbucks Secret Menu