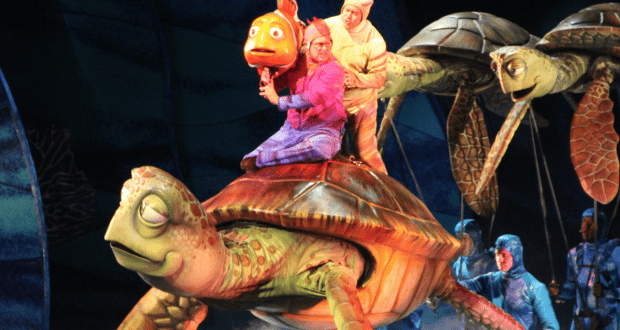 Finding Nemo: The Musical at Disney’s Animal Kingdom is Amazing!

Finding Nemo: The Musical at Disney’s Animal Kingdom is Amazing!

Don’t miss this show! I recommend showing up a minimum of 40 minutes prior to Showtime in the afternoons and 25 minutes in the mornings in order to get a great seat. The Theater in the Wild has hundreds of very good seats as this show is bigger than life and can be enjoyed from the last seat in the last bleacher of the back but if you want to be front and center get a FastPass+ or be there very early.

The size of The Theater in the Wild will impress you the moment you step inside. You may have visited this theater in the past when a show called “Journey into Jungle Book”, and “Tarzan Rocks” played here. It has now been enclosed and upgrades to sound and lighting were added. There are 1500 seats inside and the air conditioning is such a relief from Florida’s heat and humidity. The show is almost forty minutes long so go at a time you can enjoy this longer attraction time.

You may be thinking back to when you saw Finding Nemo the film, and you don’t remember singing. You are correct. The music was written specifically for this Animal Kingdom show. The story reflects the familiar tale of Marlin, who is actually the Clown Fish Dad, not a marlin fish, and Nemo, his son. Their story begins where Marlin is being over protective of Nemo, then Nemo gets a bit rebellious and swims away from his Dad. The story then shows Marlin meeting a very forgetful fish, Dory, who wants to help him find Nemo. We see some of their adventures in the ocean running into Bruce the shark and jellyfish. There is comedy in Dory who sometimes remembers details, sometimes doesn’t remember meeting Marlin at all. In the meantime Nemo has been scooped from the sea to join other sea life in an aquarium of a dentist’s office. He faces certain death in the hands of the dentist’s young daughter, he is convinced of this by the other inhabitants of the tank. They want to help Nemo get back to his Dad and come up with a variety of ideas to help him escape the tank. Finally, one of the plans actually works. Danger still lurks as Dory is suddenly captured by a fishermen’s net and Nemo moves in to save her. He succeeds and the three form a friendship, even though Dory doesn’t remember much.

This show has heart, comedy, nice music, and the most amazing thing is you don’t even notice the actors and puppeteers who fill the stage, you feel as if you truly are under the sea. After you have enjoyed this focusing on the puppets once, go back to watch it again, paying attention to the actors themselves. The talent will blow you away! The puppeteers are the ones operating the puppets and singing the songs themselves. Now that is multitasking!

The puppet designer is the same man who created the puppets for the award winning The Lion King on Broadway. They used a Tony Award Winning director as well to produce this very entertaining musical with 14 original songs. This is one of the best shows on Walt Disney World property.

Look for the dancer with the coral that looks a couple of stories tall and Crush, who is about the size of a large automobile. Nigel, if you remember from the film is the pelican that shows up at the window of the Dentist’s office, is actually 22-feet tall. There are special effects that work well to convince you that you are under water.

You will find the theater located between DinoLand U.S.A. and Asia. There are restrooms located near the exit of the theater. Cast Members are there to assist you in finding the exit should you need to leave during the performance. If you have young children you need to find seats where they can see. Half way up the center section is actually the best in viewing. I think you will find this musical an extremely entertaining way to spend 40 minutes and you get to sit down in air conditioning, in the dark. Making this your destination following a lunch at Tusker House makes a great afternoon at Animal Kingdom! 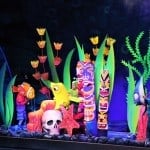 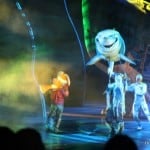 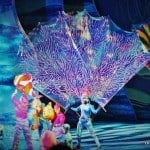 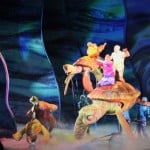 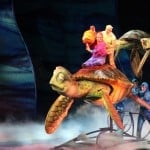 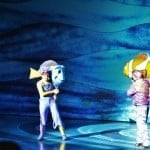 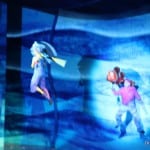 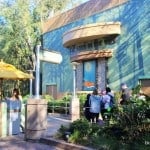 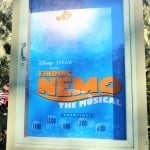 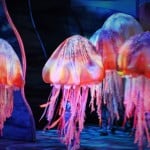 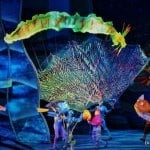 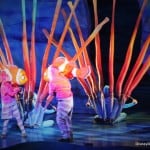 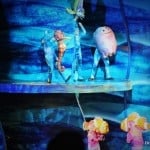 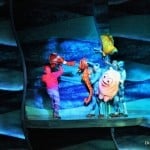 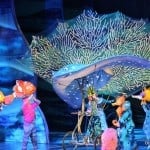 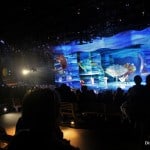