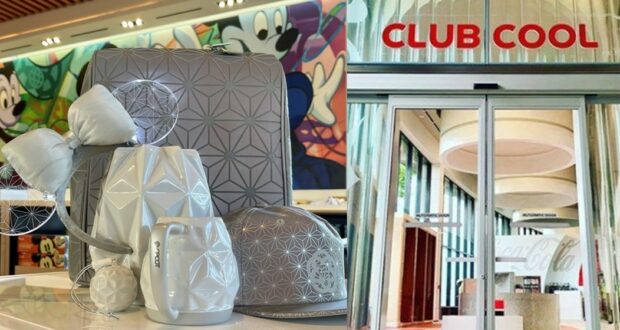 Exciting news coming out of Walt Disney World! With the 50th Anniversary celebration less than 25 days away from launching on October 1, 2021, we’re learning new additions will be arriving early at EPCOT! We previously shared the news that MouseGear would no longer be the flagship merchandise location at EPCOT. Rather, Disney announced a shop called “Creations” is coming soon. With that news, Disney also shared that they may have closed the old Club Cool featuring Coca-Cola, but would be revitalizing the shop for a newer experience. We have now learned that Disney has officially revealed the opening date for the highly anticipated Creations Shop as well as the revitalized Club Cool.

What is the most exciting thing about a new shop? The NEW merchandise! As shared via Disney Parks Twitter: “Check out this sneak peek of the “Light” line from the EPCOT Light & Color Collection, exclusive to Creations Shop! The assortment of futuristic gear was inspired by the historic transformation of EPCOT and will debut on Sept. 15 when Creations Shop & Club Cool officially open.” Check out the photo in the tweet below of this new Disney Park “EPCOT Light & Color Collection”:

While details are limited on both Creations and Club Cool we have been updated on occasion by Walt Disney Imagineer, Zach Riddley. Zach recently shared a new “Mouse in Motion” mural that will be located inside Creations Shop.

We have also been teased with details about the new Club Cool, including a first look at the new marquee as shown in the image below with the huge glass walls:

Both Creations Shop and Club Cool will be located in the Future World portion of EPCOT. Mark those calendars to do some new shopping and sipping at EPCOT on September 15!