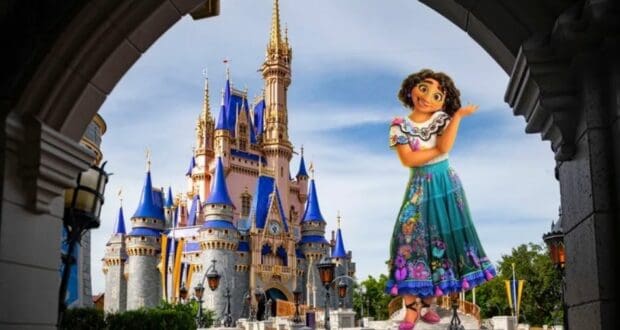 If you’re an Encanto fan, we have some exciting news for you as The Walt Disney Company’s CFO has confirmed an Encanto experience is coming “soon”.

The Walt Disney Animation Studios film, Encanto was released in November 2021 and Disney movie lovers haven’t stopped talking about it since. The diverse Madrigal Family is full of inspiring characters, and the award-winning music by Lin-Manuel Miranda is stuck in our heads on repeat. Disney isn’t keeping its Encanto success a secret as the film has already been deemed an upcoming franchise by Disney CEO Bob Chapek.

Lin Manuel Miranda recently confirmed that Disney is in talks over an Encanto experience within the Disney Parks. We’ve already seen an Encanto projection overlay at “it’s a small world” at Disneyland Resort as well as its spectacular Encanto float at Disneyland’s returned Main Street Electrical Parade. Plus, Mirabel Madrigal has been known to pop up for a character meet and greet opportunity at Disneyland Park and Disney California Adventure.

Now, Disney has announced Disneyland’s Tarzan’s Treehouse (similar to Walt Disney World Resort’s Swiss Family Treehouse) will be undergoing transformation. Rumors are swirling that the treehouse could be transformed into an Encanto attraction, but Disney has yet to confirm.

On May 18, 2022, Senior Executive Vice President and CFO of The Walt Disney Company, Christine McCarthy, spoke at the MoffettNathanson 9th Annual Media & Communications Summit in which Encanto was mentioned.

“So, our parks have been around for a long time. Disney World is celebrating its 50th. Disney Land is just celebrated its 65th, it’s now 66, soon to be 67. But if you went there in the ’60s or the ’70s or the ’80s, it’s not the same experience and even if you hadn’t been there four or five years you will go and you will find something that was updated, it may be a seasonal update, it may be something that we’ve pulled in from some of our great content, something that’s not yet really in the parks, but I think you will see it soon is something like Encanto.”

“What was really just wonderful in the music that — elements of that could be incorporated into the park experience. Some of it will be transitory, some of it will be more permanent. Certainly, when we put like a Marvel or Avengers Campus, that’s more permanent. But we can do things with entertainment that really are relevant. So, I would say it’s cast, creativity and relevancy. And that unless you’re there with your eyes open and letting your — let you experience the heart and the mind, I don’t think people appreciate that.“

We’re extremely curious to know what’s in the works at the Disney Parks for Encanto. Now that we have confirmation of Encanto’s growth from Bob Chapek, Lin-Manuel Miranda, and Christine McCarthy – it sounds like we may be able to enjoy Encanto in the Parks sooner rather than later!

2022-05-20
Jamie Sylvester
Previous: Disney Executive Is Retiring After 50+ Years With the Company
Next: A Childless Millennial’s Take on ‘Turning Red’