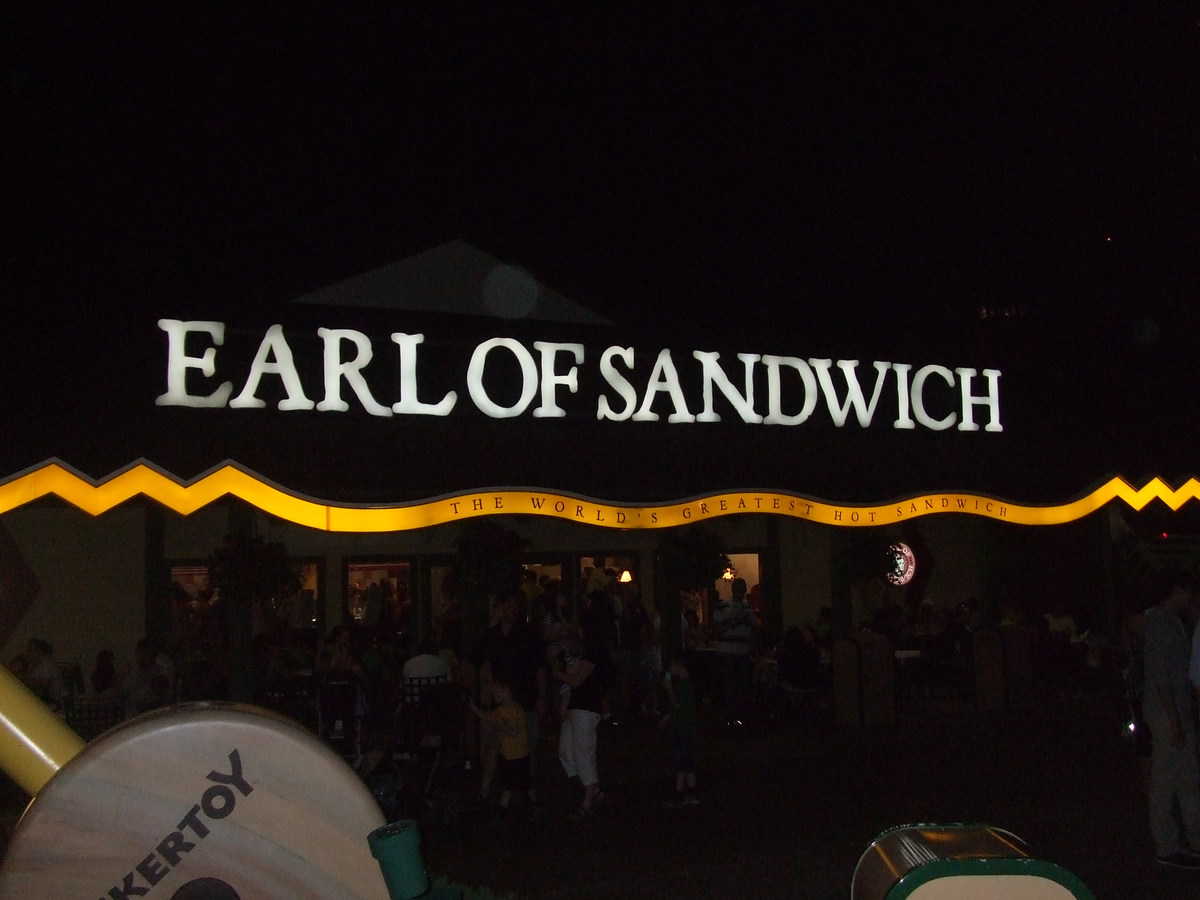 I am not a huge fan of Downtown Disney in the evenings, especially on the weekends. It is always crowded and it’s hard to get where you want to go. So of course my husband, daughter and I decided to try Earl of Sandwich on a Saturday evening. We arrived at 7:25, the line was winding around the inside of the restaurant and almost out the back door. It seemed to be moving so we decided to stay. Many people who entered after us saw the line and left, it was that long. There was a staff member who was trying to keep it moving, making sure that it headed in the right direction and handing out menus. My husband grabbed a table (there were several empty tables available, which was surprising given the crowd) while we placed the order.

Twenty minutes later it was our turn. We ordered the Tuna Melt for my husband, the Caprese for me and the All American for my daughter. She and I are both vegetarians so we ordered hers without the turkey, which was no problem. We were given a pager for when the order was ready. After you order there are many options for sides and desserts. We picked a couple of things up and went to pay. I order an iced tea, which I was informed is unsweetened, we bought a bottle of water for my daughter. We then joined my husband. When I realized that I forgot to order my husband’s Coke our daughter went to a booth outside to buy him a drink so that we would not have to wait in line again.

It did not take long until the sandwiches were ready. All of the sandwiches and wraps at Earl of Sandwich cost $5.99 and are served on a toasted artisian loaf. We were all thrilled with our choices. The tuna in my husband’s sandwich was prepared exactly the way that he likes it and there was a lot of melted Swiss cheese. My Caprese was simple and delicious. There were thick slices of fresh mozzarella cheese and flavorful Roma tomatoes. There was also fresh basil and balsamic vinaigrette, which was not overpowering. Our daughter arguably had the best choice of the three. It was brilliant in its simplicity. It contained sharp cheddar cheese, Roma tomatoes and lettuce. The best part was the cranberries, they gave the sandwich an extra kick. It had just the right amount of ranch dressing. Normally it would also have roasted turkey but as I already mentioned, we ordered it without.

We tried the coleslaw as a side. The veggies in it were fresh and crispy and it had the perfect amount of dressing. It added to the flavor of the side but was not overpowering. We bought two bags of Earl’s chips. The salt and vinegar had a strong vinegar flavor, they reminded on the chips that I had when I was in England year’s ago. We also tried the baked potato crisps. They were quite good for baked chips, a lot better than the ones that you might buy at the local supermarket.

There is a large selection of desserts at Earl of Sandwich. We decided to split a strawberry shortcake and a cupcake three ways. Both were good but nothing were overly special. The strawberries were fresh, it was a nice end to a meal. The cupcake was large and flat. The one that we bought was yellow with chocolate frosting and plenty of sprinkles on top. It was moist but not nearly as good at the cupcakes that are sold at the nearby BabyCakes.

The place was loud, I am not sure if that was because of the crowd or if it is like that normally. It is simply furnished, there is some information on the Earl of Sandwich himself if you want to take the time to read it. There is plenty of seating inside and outdoor tables are available as well.

F-Food- Excellent. The food is delicious, the sandwiches are filling and the prices are affordable. This is one of the better values that you will find at Disney.

A-Atmosphere- Nothing special. The place looks nice but it is forgettable.

S-Service- Fair. They kept the line moving but there was no time for questions.

T-Tips- Don’t go on a Saturday evening unless you have time to wait in line! It is a popular place, not only for tourist but also for the locals. Try to stop by for a late lunch or a very early dinner, you’ll save yourself plenty of time.