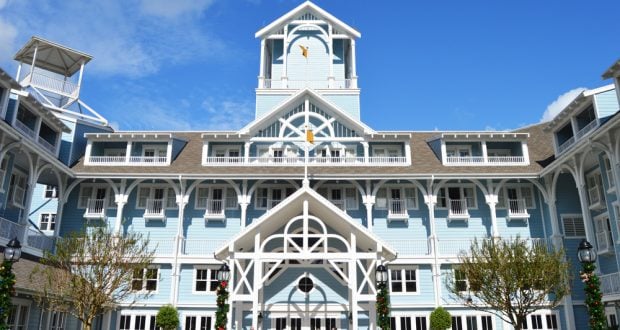 The Beach Club Resort is a Deluxe hotel located in the Epcot or Boardwalk area along Crescent Lake. The hotel is comprised of standard rooms and Disney Vacation Club Villas. Beach Club, and its sister resort, the Yacht Club, share most amenities, most notably, the well-known pool, Stormalong Bay. Beach Club guests enjoy close proximity to both Epcot and Disney’s Hollywood Studios (which can be accessed via either a walking path or the Friendship Boats), as well as the nightlife on the Boardwalk. But you probably already knew that. So let’s move on to some interesting things you might not know.

Sandcastle Club is one of only four Children’s Activity Centers on property. The Club offers supervised childcare in the lobby of Disney’s Beach Club resort, with activities that will entertain and educate children — and hopefully burn off some excess energy before bedtime! Parents can drop off kids aged 3-12 where they can stay from 4:30pm until midnight. Kids get to play and parents get to have a date night on vacation (perhaps at Yachtsman’s Steakhouse over in the Yacht Club), knowing that their children are in good hands. Dinner is included at Sandcastle Club. Reservations are recommended, but walk-ins are welcome if space permits. Guests from any Disney hotel can enroll their kiddos in the Sandcastle Club.

Most people are familiar with the much-touted Stormalong Bay, the highly themed pool for Yacht and Beach Club guests. But there’s also a “quiet pool” called Dunes Cove. This pool is a great choice for folks who just want to relax away from hustle and bustle. It’s set farther back from Crescent Lake, and Stormalong Bay draws so many people, that there often is no one else around in Dunes Cove.

Beach Club is home to two tennis courts, open from 7am-10pm. The courts are lit, so you can play after a day in the parks, even in the winter months. Equipment is complimentary to Yacht and Beach Club guests, just as in the Stormalong Bay Towel Window. There is also a (more well known because it’s visible from Crescent Lake) sand volleyball court, again with balls available in the Towel Window.

The Beach Club was designed by architect Robert Stern, who also designed the Yacht Club, Boardwalk Inn, and the Newport Bay Club in Disneyland Paris. Stern’s airy, Victorian seaside feel melded nicely with, former Disney CEO, Michael Eisner’s New England childhood and that likely is the reason so many seaside themed resorts sprang up during Eisner’s tenure at Disney. Even casual guests will notice Stern’s casual elegance in all three of the Epcot area resorts

Disney destination weddings are growing in popularity. For The Little Mermaid fans, consider hosting your wedding reception in Ariel’s a ballroom located in the Beach Club resort. The ballroom features hand blown glass bubbles with tropical fish light displays, paired with an ocean inspired color scheme of teals and corals. Just like the rest of Beach Club, Ariel’s is a blend of elegance and whimsy. The ballroom can hold up to 80 people, including the couple. Or, host your reception on the sand and under the stars along Shipwreck Beach in front of the Yacht and Beach Club hotels. The beach can accommodate up to 2,000 guests. The convention space situated between the Beach Club and the Yacht Club features a myriad of other event spaces, such as the Grand Harbour Ballroom, which can be broken up into as many as 10 separate rooms, as needs dictate. Any of these event spaces would be an ideal choice following a ceremony at the Yacht Club Gazebo or Sea Breeze Point, just across Crescent Lake at the Boardwalk Inn, or even one of the World Showcase pavilions.

Riding the Resort Monorail Loop and admiring the various Christmas decorations at those hotels is a fairly popular pastime for Walt Disney World guests. But many folks don’t venture past the monorail loop or their own hotel. And that means they’re missing out on the huge chocolate carousel at the Beach Club. That’s right, a life size working carousel made of chocolate. It’s an easy walk from Epcot’s “back door” at the International Gateway over to the Beach Club, so everyone should at least say hello to the Christmas display.

What’s your favorite thing about the Beach Club? Let us know!