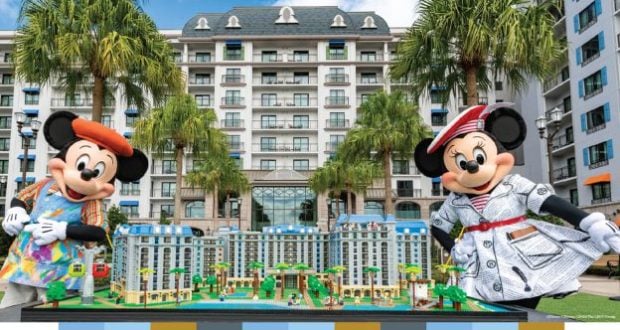 Today, December 16, Disney is celebrating the one anniversary of Disney’s Riviera Resort! While celebrating the first anniversary, Disney has unveiled a stunning LEGO model of the resort. Check out the details and photos shared by DisneyParksBlog.

“Inspired by Europe and imagined by Disney,” this new addition to the Disney Vacation Club neighborhood at Walt Disney World Resort celebrates the grandeur and enchantment that have drawn generations of artists and storytellers – including Walt Disney – to the European Riviera. And now, the resort inspired by the region that inspired so many artists has inspired a new generation of masters: the extraordinarily talented The LEGO Group.

To help mark the resort’s first anniversary, Disney Vacation Club commissioned The LEGO Group to create a spectacular model of Disney’s Riviera Resort, created in consultation with Disney Imagineers who helped bring the resort to life.

LEGO Master Model Builders spent more than 300 hours designing and assembling the intricately detailed model, which weighs in at 100 pounds and contains more than 45,000 LEGO elements. The model includes many of the resort’s most distinctive features, including miniature recreations of the Disney Skyliner transportation system, the resort’s feature pool and waterslide, and its signature “RR” monogram.

Mickey Mouse and Minnie Mouse were among the first to admire the model’s faithful details (even seeing themselves depicted outside the Topolino’s Terrace – Flavors of the Riviera rooftop restaurant) when the 84-inch-by-66-inch sculpture made a brief appearance at Disney’s Riviera Resort.

Look for the model to arrive early next year to the Disney Vacation Club kiosk at Disney Springs Marketplace, where plans call for this one-of-a-kind work of art to remain on display through the remainder of 2021 – a year that marks 30 magical years of Disney Vacation Club.