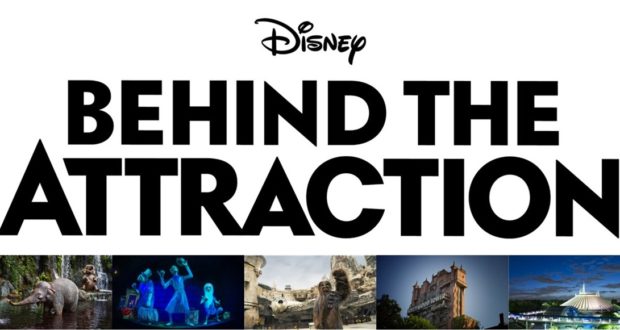 Disney’s “Behind The Attraction” First Five Episodes: Here’s What To Know

We can barely contain our excitement Disney fans! The new “Behind the Attraction” is set to begin streaming on Disney+ this Wednesday (July 21) on Disney+. We’ll finally get to peek beyond the magic of Disney Parks to discover what’s “Behind the Attraction”! Not only will the episodes keep you intrigued as you learn more about your favorite attractions than you ever thought you’d know, but we’re extremely impressed with the dose of humor and lightheartedness that makes the series fun and compelling. As you prepare for a full day of binge watching on Wednesday, here’s what you’ll want to know about the first five episodes.

If Dwayne Johnson is the producer, than you know we’re heading into the Jungle first! Join a skipper for the story behind Jungle Cruise, and try to spot the backside of water! When Walt decided to create the original immersive attraction, he tasked Imagineers with building a river in the Southern California desert AND the mechanical animals to populate it. Lead designer Harper Goff and horticulturist Bill Evans scrambled to get it all built in time for Disneyland Park’s grand opening in 1955. Guests have been cruising its waters ever since. Dwayne Johnson also appears in this episode where he discusses his childhood memories of the attraction and his favorite joke from the skippers.

Welcome, foolish mortals, to the Haunted Mansion — enter if you dare! When Walt Disney developed the attraction, he didn’t specify if it should be funny or scary. Ultimately, it became a perfect blend of both. Haunted Mansion proved so popular that it inspired several later iterations, including the chilling Phantom Manor at Disneyland Paris and the weird and wonderful Mystic Manor at Hong Kong Disneyland.

Lightspeed to Endor! A long time ago…Disney created Star Tours, a thrilling simulator attraction that takes guests to a galaxy far, far away. It inspired Imagineers to build a whole new land — Star Wars: Galaxy’s Edge. There, guests can use the Force to explore the remote outpost of Batuu and the cutting-edge attractions Millennium Falcon: Smugglers Run and Star Wars: Rise of the Resistance.

Discover the ups (and downs!) of creating this gravity-defying attraction set in the eerie world of Rod Serling’s renowned “Twilight Zone” television series. Then hold on tight as Imagineers reimagine the Disney California Adventure version as Guardians of the Galaxy – Mission: BREAKOUT! Learn what it took to build the attraction — and what it takes to ride it!

You’re about to hear the story of Space Mountain in T-minus 5, 4, 3, 2, 1…launch! Walt’s vision of an attraction that simulates space travel was a design challenge Imagineer John Hench tackled head on, creating a signature structure now in Disney Parks around the world. Imagineers continued the tradition by creating another thrilling indoor attraction, the landmark TRON Lightcycle Power Run at Shanghai Disney Resort.

Which one of these are you most looking forward to? All we can say is well done Executive Producers Dwayne Johnson, Dany Garcia and Brian Volk-Weiss! We’re beyond impressed and want more and more attractions covered in this same way! “Behind the Attraction” begins streaming on Wednesday, July 21, on Disney+ with the five episodes mentioned above. An additional five episodes will be released later this year. If you missed the trailer, check it out below as you prepare for streaming on Wednesday!