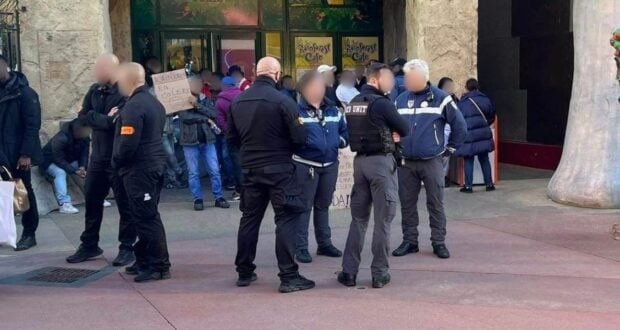 We previously shared the news that security was enhanced at one Disney Park as Guests gathered to protest the theme park reservation system implemented by Disney. Now, we’re seeing more protests unfold for the Disney Resort.

Disneyland Paris Resort is in the midst of its 30th Anniversary, but instead of celebrating, it seems like more and more Disney fans are disgruntled about the Park’s current offerings, including the addition of the Park Reservation System.

While Walt Disney World Resort and Disneyland Resort Guests are fairly used to the process of making Park Pass Reservations since the Parks reopened after COVID closures, Disneyland Paris Guests took action by performing a protest which required a heavier security presence.

Now, we’re seeing more protests unfold, but this time at Disney Village, just outside of Disneyland Paris. Disney Village is like the Disney Springs for Walt Disney World or Downtown Disney for Disneyland.

Just moments from the Disneyland Paris Park entrance, employees of Rainforest Cafe are asking for better work conditions which forced the restaurant to close.

@DLPReport took to social media to share photos of the demonstration along with the note, “At Disney Village, employees of the Rainforest Cafe independent franchisee are demonstrating for better work conditions. The location is closed today and until further notice as a result.”

RELATED: Family’s Dream Trip to Disney Becomes a Nightmare, Thanks to Airline Error and “Passing the Buck”

As you can see in the photos, the employees are standing directly in front of the restaurant in Disney Village. There is also an enhanced presence of security for the situation.

While some of the comments say, “Good for them, get that Mouse money” and “Great. Finally people against Chapek demonstrating,” others remind them that Rainforest Cafe is an independently owned restaurant, simply located within Disney’s property.

Just like the two Rainforest Cafe locations at Disney Springs and Disney’s Animal Kingdom Park, Disney Village’s Rainforest Cafe features the same Amazon dining experience that keeps both young and old entertained for lunch or dinner. But, sadly for these employees, they are obviously very eager to be seen and heard as they seek better working conditions.

As always, we will be sure to keep Disney Dining readers updated with the latest news as we learn more about this developing story.

2022-10-26
Jamie Sylvester
Previous: Disney’s TRON Is “Showing Its Age,” and It’s Not Even Open Yet
Next: “Johnny Depp is probably returning as Jack Sparrow” per report