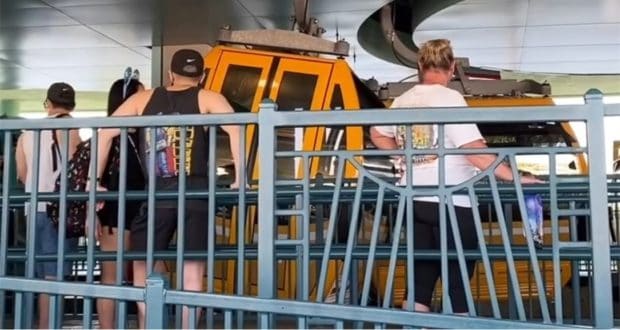 Disney Skyliner Gondolas Reportedly “Banged Into Each Other”

Last night, Thursday, April 22, it was reported that the Walt Disney World Skyliner had an issue with gondolas banging into each other. A Disney fan shared an Instagram story reporting the incident.

As reported via WDWNT: Disney Skyliner gondolas have once again crashed into each other. Instagram user nextstopmainstreet shared a video showing what appears to be two gondolas compressed against each other. Alyssa from nextstopmainstreet reports that two gondolas “banged into each other” and that there is shattered glass at the station. The incident appears to have happened at the Disney’s Hollywood Studios Skyliner station. As of 8:45pm, the Skyliner station at Disney’s Hollywood Studios reopened.

You may remember back in 2019, shortly after the opening of the Disney Skyliner, multiple gondolas piled up at Disney’s Riviera Resort station as shown in the photo above. The incident last night seems to have only included two gondolas. For the full story, visit source WDWNT.