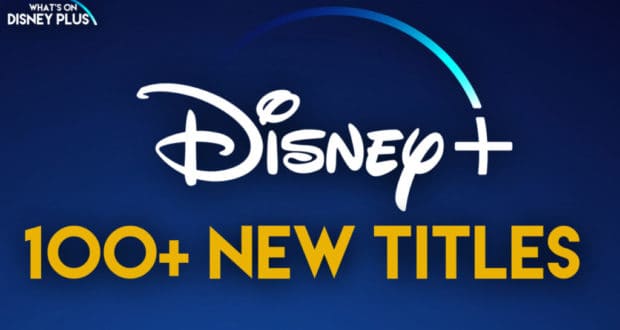 During last years Investor Day event, Disney unveiled a huge lineup of new movies and shows that will be coming to Disney+ in the next few years, and it looks like Disney+ is set to get even more original programming in 2021, as Disney has set a target of more than 100 new titles this year.

“The enormous success of Disney+ —which has now surpassed 100 million subscribers—has inspired us to be even more ambitious, and to significantly increase our investment in the development of high-quality content.  In fact, we set a target of 100+ new titles per year, and this includes Disney Animation, Disney Live Action, Marvel, Star Wars, and National Geographic. Our direct-to-consumer business is the Company’s top priority, and our robust pipeline of content will continue to fuel its growth.”

Disney has already announced a wide selection of series will be coming this year, including:

While this is a huge improvement over the amount of new content we saw in 2020, to hit over 100 new titles, does mean we’ve got lots more content to be revealed.   So far this year, we’ve already seen the following titles released on Disney+:

While I do not doubt that Disney+ will get over 100 new titles throughout the year, I’m not 100% convinced they will all be Disney+ Originals, which are only available on Disney+.

In the statement, there is no mention of “Star Originals”, which will add another 35 new shows to Disney+ in over 17 countries, including the UK, Canada and Australia.  There is also no mention of Disney+ Hotstar Originals in India.  So these might not be included in the total.

There could also be another way Disney+ gets much more new content, with more shows possibly being released around the same time they are released on traditional television networks.   New episodes of the Disney Channel show “Secrets Of Sulphur Springs” have been released weeks after they’ve aired on the network. The upcoming third season of “Gordon Ramsay: Uncharted” will see new episodes arrive on Disney+ the day after they air on National Geographic.  It wouldn’t be surprising to see new episodes drop much faster onto Disney+ and potentially also be included in the 100 new titles a year total.

To hit 100+ new titles, I suspect more titles from the Disney Channel and National Geographic will be shifted to Disney+ to increase the amount of new content available.   And should many of Disney’s theatrical releases also debut on Disney+ Premier Access, this could also help increase that number of “new” titles.

One thing is for certain, Disney has made a huge shift to becoming a streaming company during the last year and prioritised it above all other things.   Disney+ is going to continue to grow and with so much competition from other streaming platforms like HBO Max, Amazon and Netflix, Disney is going all-in on giving subscribers new content to watch.

What are looking forward to seeing added?