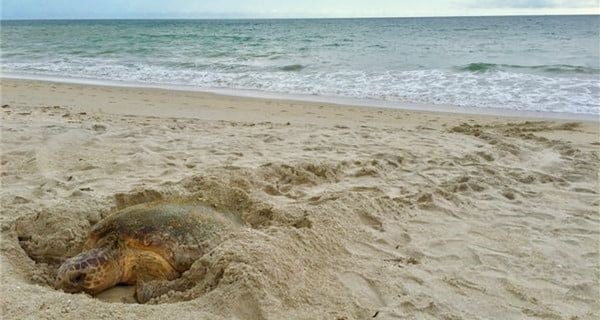 When we think “Disney” our minds go to attractions, snacks, and magical memories. But, one of Disney’s major efforts is conservation of this planet we live on and the creatures that make it so beautiful. Disney recently released four rehabilitated green sea turtles in Vero Beach after providing months of critical care. Check out the details below!

After months of receiving specialized care at The Seas with Nemo & Friends at EPCOT, Disney Conservation Team Wildlife released four rehabilitated green sea turtles near Disney’s Vero Beach Resort earlier this week. The threatened juvenile sea turtles, ranging in size from 6.5 to 10 pounds, were rescued near the resort this past spring after washing ashore malnourished, dehydrated and lethargic. In partnership with the Florida Fish and Wildlife Conservation Commission (FWC), the sea turtles were first taken to the Brevard Zoo and later transported to The Seas with Nemo & Friends at EPCOT for further medical care. A team of Disney animal care professionals worked to nurse the sea turtles back to health, giving them much needed fluids, antibiotics and nourishment.

“All seven species of sea turtles around the world are considered to be threatened or endangered,” said Dr. Mark Penning, Vice President of Disney’s Animals, Science and Environment team. “We recognize that every sea turtle counts toward reversing the decline. The successful rehabilitation and release of these green sea turtles demonstrates the incredible dedication of our Cast Members and Disney’s overall commitment to wildlife conservation.”