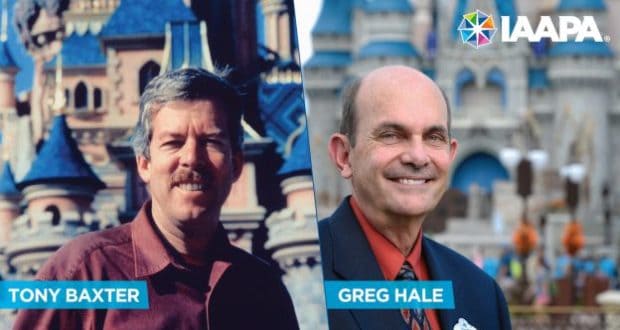 Disney Legend Tony Baxter and Disney innovator Greg Hale have been inducted into the International Association of Amusement Parks and Attractions (IAAPA) Hall of Fame. Check out their incredible involvement with the Walt Disney Company below as shared by DisneyParksBlog.

Tony Baxter, who is a former Walt Disney Imagineering creative executive, was honored earlier today with the Lifetime Achievement Award from IAAPA for his decades of work on some of Disney’s most memorable attractions.

Tony, who began his Disney career working as an ice cream scooper at Disneyland, started working for Walt Disney Imagineering (then called WED Enterprises) in 1970. Over the next 43 years, he helped oversee and create such attractions as the Land, Seas and Imagination pavilions at EPCOT, Big Thunder Mountain Railroad, the major refurbishment of Fantasyland at Disneyland in 1983, Star Tours, Splash Mountain, Indiana Jones Adventure and Finding Nemo Submarine Voyage. He was also the executive producer who oversaw the design of Disneyland Paris, which opened in 1992.

In 2013 Tony received the Disney Legend award as well as a window honoring him on Main Street, U.S.A. at Disneyland. Following his retirement that same year, Tony continues to consult with Walt Disney Imagineering on various projects and mentors the next generation of Imagineers.

Greg was also honored today for his extraordinary accomplishments and contributions as a leader and innovator at Disney.

Greg, who is Disney Parks’ chief safety officer, leads a global team of ride design, operations, maintenance and safety professionals around the world that keep Disney on the leading edge of theme park safety, accessibility for guests with disabilities, and technology advancements.  Greg has received a number of previous awards in recognition of his commitment to safety and for fostering innovative practices that increase access to Disney experiences for those with disabilities. He holds dozens of U.S. patents and is credited as one of the inventors of Disney FASTPASS Service. He has served on several industry safety boards and associations and has held a number of leadership roles within IAAPA, including as the organization’s chairman in 2017.