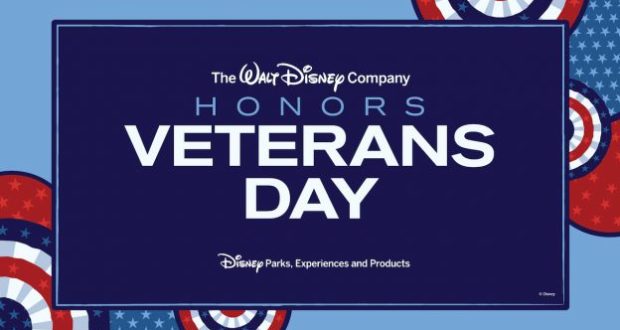 Happy Veterans Day! On Veterans Day, Disney is recognizing with gratitude all those who have, at any point in their lives, stepped up and worn a uniform to serve our country. This year, Disney is expressing their commitment to military veterans and families in a brand-new way. At sunrise on this Veterans Day 2020, Disney began with a special salute. Check out the details and special video as shared by DisneyParksBlog below.

This commemoration held special meaning for Walt Disney World Resort Security Manager Mike Viola, who joined the Disney family five years ago, following a 31-year career in the U.S. Navy. He and his wife Leslie, a 20-year Navy veteran and former WDW Security Investigator cast member, have been coming to the resort since they said “I do” in 1992.

Since that time, the pair deployed seven times between them in 12 years of service, and their love of Disney served as a way to pass the time and keep their family connected. During time apart, Mike and his family would watch Disney DVDs “together” (at their respective locations) and plan a trip to Disney once each deployment was over – making dining reservations to keep everyone focused on reuniting together at Walt Disney World once the mission was complete.

They loved Disney so much, both Mike and Leslie came to work for the company after retiring from the Navy. As Mike puts it, “I work at Disney because of the joy this company has brought to not only my family but tens of thousands of other families who visit every day.”

Honoring Veterans in the Skies Over Walt Disney World Resort

A few days earlier, U.S. Air Force Thunderbirds helped Walt Disney World mark the beginning of National Veterans and Military Families Month with a goose-bump-inducing flyover while they were in the area for an air show. The flight was a special tribute those who have served in uniform as well as our fallen military heroes, and we are honored that they chose our resort as the venue.

You can also find tributes to veterans every single day at our Disney Parks. Here at Walt Disney World, statues of Walt and Roy Disney grace each end of Main Street, U.S.A., and the brothers each served in uniform during World War I. In fact, Roy was recuperating in a veterans’ hospital when Walt visited him and pitched the idea for what became The Walt Disney Company.

Nearby, on Seven Seas Lagoon, another homage to veterans often passes unnoticed. Navy Admiral Joe Fowler and Army General Joe Potter were each essential to the creation of The Disneyland Resort and Walt Disney World. In 1997, Disney honored these two flag-rank veterans by naming the ever-popular Seven Seas Lagoon ferryboats after them. You can read the story about the Admiral Joe Fowler and General Joe Potter ferryboats on the D23 website here.

Thank You for Your Service

Over the years, one tradition cast members with military service at Disneyland and Walt Disney World have come to enjoy is the annual character sketch depicting different beloved Disney characters saying “Thank you for your service” each year. This tradition began at Disneyland Resort around 20 years ago when the sketch created by their Entertainment Art team was presented to cast member veterans after the annual Veterans Day Flag Retreat ceremony. The tradition expanded to include Walt Disney World Cast Veterans in recent years. This year’s print features Chip & Dale offering a hearty salute to those who have served our nation.

You can also download and open the My Disney Experience App today for a special Veterans Day message. We at Disney are grateful for all those who have served and continue to serve. On Veterans Day and beyond, we thank you for your service!