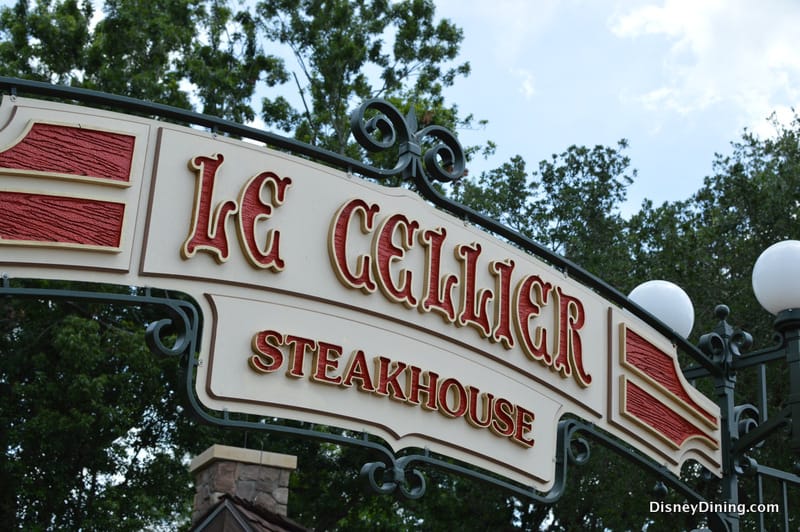 In the mood for steak during your Disney World visit? If you’re willing to plan a meal in advance look no further than the cult favorite, Le Cellier. Seriously folks, for some a trip to Disney isn’t complete until they get their filet and cheese soup. Our waiter even said if the pretzel bread, cheese soup, or filet were taken off the menu there would angry mobs of people with pitchforks outside the restaurant the very next day, and you know what? The man isn’t lying.

Before I go any further, let me give you some background info on this ridiculously popular steakhouse. Le Cellier is located in the Canada pavilion at Epcot. It’s through the Victoria Gardens and below the Hotel du Canada, the main building in the pavilion that is modeled after the Chateau Laurier hotel. The restaurant mimics a wine cellar with its low lighting, stone arches, and dark woods. The dining room is divided into each of the ten Canadian provinces. For our dinner we were placed in British Columbia.

To begin our meal we were served a basket of mixed breads and butter. There were soft pretzel bread, sourdough rolls, and a multigrain roll. For the sake of research I had to try one of each! Each was delicious and warm, with the multigrain roll being slightly nutty, the sourdough being wonderfully chewy, and the pretzel bread being our absolute favorite. We couldn’t help but ask for more! The butter was topped with sea salt and maple. Don’t worry, the butter just has a tiny hint of sweetness to it that I found quite enjoyable and not overpowering at all.

We ordered the farmhouse “poutine” as an appetizer, and boy am I glad we did! Let me warn you right now though, this is not true poutine so those wanting a genuine experience should steer clear of this option.

This dish begins with a base of crisp, yet fluffy, French fries, which are then topped with tomato jam, various cheeses, bacon snow, micro arugula, and a soft-poached egg. This is the definition of gourmet man food and it is one of the most delicious foods I have ever had. The heirloom tomato jam is sweet, acting almost like ketchup. The cheeses were dispersed through the entirety of the dish. The micro arugula was herbaceous and peppery, breaking up the richness of the cheese, tomato jam, and egg. The soft-poached egg was cooked perfectly, with a silky round white cradling a velvety, luscious yolk.

I never got much of the bacon flavor from the bacon snow however, even when I tasted the ingredient on it’s own, but this didn’t really bother me much as there were so many other components of the dish that were working so well. It was good we sopped up the leftover bits of yolk, cheese, and jam with pretzel bread leaving the plate clean.

Entrees were up next and they had a hard act to follow. On a previous visit to Le Cellier I had ordered their signature dish, the mushroom filet mignon, so I opted for something different this time around and chose the cast iron sirloin. This steak is served on a bed of Anasazi beans and braised leeks, and is topped with pickled onions, roasted rainbow carrots, and a chimichurri sauce.

The Anasazi beans were robust and sweet with a dull pinkish brown coloring. The pickled onions had just a hint of vinegar to them and paired very well with the steak and sauce. The sauce was what really made the dish, it was bright and fresh, delivering tons of flavor to the meat. The sirloin itself was tender with a nice seared crust that can only come from a hot cast iron pan. Overall, I enjoyed my entree, but I found the a little lackluster in comparison to the meat and chimichurri.

My dining partner chose the mushroom filet mignon. The AAA Canadian beef tenderloin is served on wild mushroom risotto, drenched in truffle butter sauce, and accompanied by pickled pearl onions. There was also a green oil on the plate, which didn’t really add much flavor. Meanwhile, every other component on the plate was bursting with flavor! You could see just how juicy the steak was and it was unbelievably tender, the true definition of melt in your mouth steak. The generous portion of truffle butter sauce added another level of luxury to the dish that further embellished with the luscious mushroom risotto. This dish is seriously filling, between all the pretzel bread and the poutine we had earlier he couldn’t finish it.

An evening at Le Cellier is full of decadence and luxury. It is a highly coveted meal to many, and just one bite can prove its worthiness.

Food – Fresh, delicious, and top quality. You basically can’t go wrong with anything on the menu, but the cheddar cheese soup and mushroom filet are fan favorites for a reason.

Atmosphere – You’ll feel transported to a cozy wine cellar deep in Canada. The theming is classic and not at all over the top with loads of details. It wasn’t too noisy while we were there, but due to its popularity the noise level might be higher here than other signature Disney restaurants.

Service – Everyone from our hostess to our waiter was very friendly and nice. We never had to wait for a drink refill and were offered everything we needed during the course of the meal. 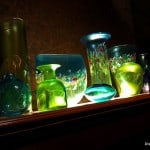 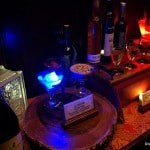 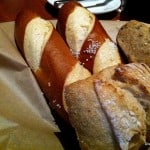 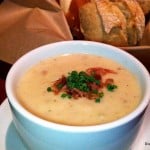 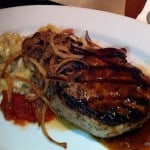 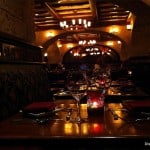 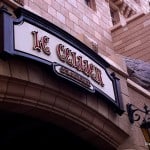