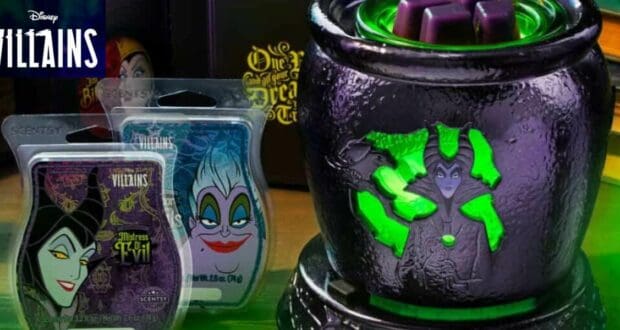 Well, well, well – what do we have here? Disney Dining has some wickedly good news as we are giving away a Disney Villain Scentsy prize pack to one of our lucky readers this Halloween season!

With the spooky season upon us, what better way to enjoy all things spooktacular than with a Villain’s Scentsy! The winning prize package consists of the highly sought-after Disney Villains Scenty Warmer.

PLUS the Disney Villains Wax Collection inspired by three of Disney’s most notorious villains — the Evil Queen from Snow White and the Seven Dwarfs (1937), Maleficent from Sleeping Beauty (1959), and Ursula the Sea Witch from The Little Mermaid (1989).

“The Evil Queen, Maleficent and Ursula the Sea Witch are etched in fine detail onto a cauldron perched atop a bed of twisted thorns. Images on the interior sleeve reveal more of each character’s story, and the included green light bulb adds an eerie effect. Just beware the poison apple in the dish!“

Here’s a video of the different sides of the Scentsy Warmer:

The Disney Villains wax bars themselves feature these official descriptions:

“Evil Queen: Just One Bite Scentsy Bar — The temptation is too much to resist when poisoned apple hidden deep in forest woods blends with warm cinnamon and menacing black molasses.“

The total value of this Scentsy Collection prize package is $95. To enter, scroll to the bottom of this page.

RELATED: Ursula Takes Over A Disney Resort In The Most Impressive Way

Poor unfortunate souls in pain, in need. Do they lack a striking centerpiece? We can help them, yes indeed! This sculpted vase evoking Ursula’s tentacles fills a void in your home decor at a bargain price.

Or how about sipping your beverage of choice from the impressive Maleficent Chalice by Enesco, inspired by the classic Disney film Sleeping Beauty:

This magnificent Maleficent chalice is inspired by Walt Disney’s 1959 animated classic Sleeping Beauty. With dazzling detail and creative draftsmanship, this unique collectible highlights the magic and majesty of the Mistress of Evil.

Entering this giveaway is as simple as submitting the form below. Once you do this, you will be entered. We contact winners via email, so be sure to enter with an email address you check regularly.

We give everyone a chance to earn bonus entries after their initial entry. These bonus entries help improve the odds of those willing to put in a little extra effort. Pick and choose as many (or few) of these bonus categories as you like. Best of luck!

2022-10-14
Jamie Sylvester
Previous: The Newest Attractions in Walt Disney World You Might Not Have Enjoyed Yet
Next: Former Imagineer Says Disney Parks are “Needlessly Complex”