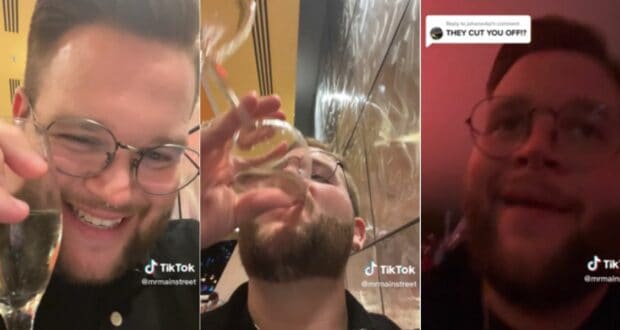 A Disney Park Guest set off on a mission to get drunk at Magic Kingdom… which, as you’ll see in the video below, ultimately led to him being cut off despite the theme park dining experience offering.

The once dry Magic Kingdom Park has been in the news recently for its additional adult beverages being served at several locations. Unlike EPCOT, Disney’s Hollywood Studios, Disney’s Animal Kingdom, and Disney Springs, alcohol is ONLY served at Magic Kingdom’s table-service restaurants and select dining experiences.

RELATED: Where to Find Alcohol at Disney’s Magic Kingdom

But, one Guest treated the unlimited beer and wine offering as a challenge. How many could he drink within an hour time frame? As he notes in the video below, “I’m not here for dessert… I’m here to get drunk at Magic Kingdom.”

@mrmainstreet took to social media to share the video below, as he counts how many drinks he consumes before getting cut off.

As shown in the video, this Guest was cut off at alcoholic drink number twelve.

A follow-up video was posted in response to “They cut you off!?!” as the Guest walked out of the Park singing and seemingly feeling the warmth of the alcohol. Since this article was first published, the follow-up video has been deleted from the Guest’s TikTok profile.

Despite the unlimited dessert and drink offerings during the Walt Disney World Resort dessert parties, it looks like Disney is still keeping an eye on their Guests and cutting off drinking that may have gone too far.