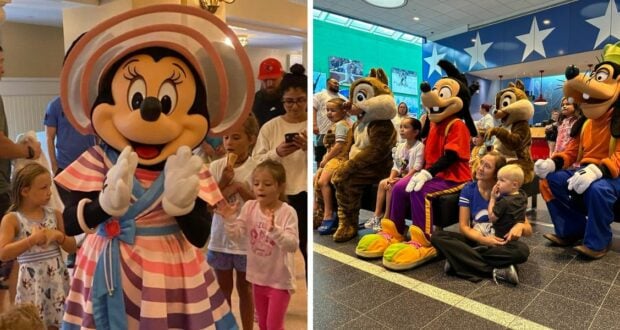 On September 28, Hurricane Ian hit Central Florida as a Category 1 hurricane. There were strong winds, flash flooding, and power outages across the area — including at the Walt Disney World Resort. While some Guests had managed to get out of town before the storm hit, other Guests decided to stay and ride out the storm, while others found themselves stranded at the Most Magical Place on Earth because all Orlando airports were closed. Because of Hurricane Ian, Disney shut down its theme parks on September 28 and September 29 — and may extend it to September 30 — so Guests staying on property were stuck in their hotels. However, Disney still wanted to make sure they had the most magical time possible.

Multiple Guests took to social media to share pictures and videos of the characters that came out to interact with Guests in the lobby area of various Disney World hotels.

A fun dance party with the Country Bears during the resort lockdown for hurricane Ian at Wilderness Lodge. #WaltDisneyWorld #disneyworld #disney #disneyparks #hurricaneian

Wilderness Lodge was not the only place Disney characters were spotted. Disney’s All-Star Sports saw Goofy, Max, Chip, and Dale sitting down with Guests to enjoy a movie.

Some magic at Disney’s All-Star Sports Resort during #HurricaneIan.

Some magic at Disney's All-Star Sports Resort during #HurricaneIan. https://t.co/o0RFnoNy9y

Stuck at #DisneyWorld during #HurricaneIan but wife and son found some friends to watch Mickey Mouse cartoons with 😊 pic.twitter.com/fcBNxFH5Fd

Minnie Mouse and Donald Duck were seen hosting another dance party at Disney’s Beach Club Resort, much to the delight of Guests.

What happens at a Disney Resort when a hurricane hits and the parks close? Well… at Beach Club Resort they had a character dance party tonight!

Disney Dining will keep readers updated as Disney announces when they plan to reopen the theme parks and Disney Springs, or if they choose to extend the closures.