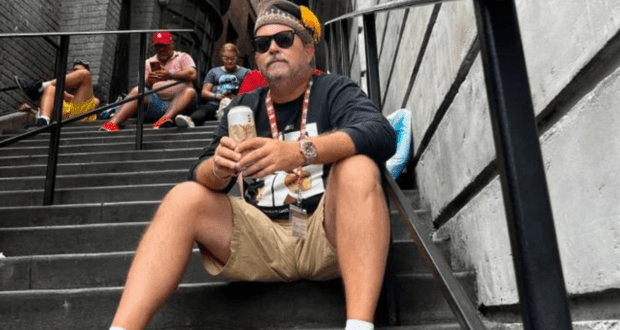 A guest at Universal Studios Orlando Resort recently enjoyed a “glorious” day at the parks, riding what he wanted to ride, thanks to an unfortunate event experienced by his daughter.

Earlier this week, a man and his daughter traveled to Universal Studios Orlando Resort and had plans to enjoy the park together. But some bad food at a local hotel had other plans.

The dad, who goes by the name u/custermustache (perhaps because he dons a mustache reminiscent of the one worn by Colonel Mustard?), says that his daughter fell prey to food poisoning, thanks to something she ate at a restaurant at the hotel where the family was staying. (Don’t worry; it was off-property.)

The post reads, “My daughter got food poisoning the night before we got in. I spent the day alone in the park and it was glorious.”

My daughter got food poisoning the night before we got in. I spent the day alone in the park and it was glorious. from UniversalOrlando

According to the dad’s posts on Reddit, he was sad about his daughter feeling sick, but he enjoyed his solo time at Universal–riding whatever he wanted to ride and drinking “just about as many beers as I wanted.”

Another post from the solo-tripping dad reads, “I am sad my daughter got sick, and she and my wife went back to the hotel, but I have to say, I had an amazing time hanging out solo in the park, riding whatever I wanted, and having just about as many beers as I wanted. She recovered the next morning, and we enjoyed the park as a family – but my solo day was just fantastic.”

The Redditor’s post was initially about his enjoyment of the park all by himself, and he got lots of support from others in the Reddit community who believe in the value of solo parks trips.

But one Redditor just had to ask, “Why didn’t your wife get solo time at the park?”

Hey, it’s a reasonable question, to which the solo dad had a very reasonable answer:

Hey, when kids are sick, they often want their moms. We get it. Here’s hoping they enjoyed the remaining day of their trip as a family and had no more food poisoning!

2022-10-13
+Becky Burkett
Previous: Netflix Will Soon Cost Less Than Disney+
Next: The Newest Attractions in Walt Disney World You Might Not Have Enjoyed Yet