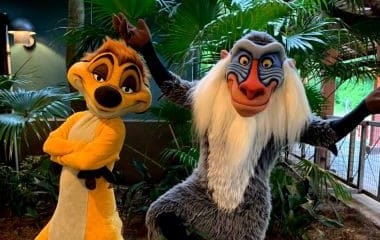 Circle of Flavors: Harambe at Night at Walt Disney World

Circle of Flavors: Harambe at Night is a limited time special ticketed event at Disney’s Animal Kingdom. It takes place while the park is still open. It takes you on both a physical journey and a journey of tastes. When Disney invited me to experience Circle of Flavors as their guest, I was more than happy to accept the offer.

Circle of Flavors starts right outside of the train station in Africa. The Wildlife Express Train and Rafiki’s Planet Watch are both closed to non-party guests during the event. I checked in a little bit before 6:00 and headed immediately towards the station. I was given a passport with the information for the evening, plus a train ticket. There was a map outside, and a Cast Member on hand to explain what the evening was all about.

At the train station the guests were greeted with champagne or a champagne cocktail. A nonalcoholic version was available. Once inside the train station there were snacks and beverages. All foods and beverages are included in the cost. There was a musician who walked through the crowd, and there were plenty of Cast Members on hand to answer questions.

The train ticket had a time printed on it. In theory that was the time when you were supposed to board the train to go to Rafiki’s Planet Watch, but the time didn’t really matter. People boarded the train at their leisure. There were not a lot of people at Circle of Flavors, one train could have easily carried the entire group. Someone told me that the event is for up to 100 people, but that was not official.

On the ride to and from Rafiki’s Planet Watch the information over the loudspeaker was about the event. Once we arrived we were greeted by Rafiki and Timon. Since the line for the meet and greet was short, they had a great time fooling around with the guests. There was more food and drink there. A good part of the area was blocked off, you could only go in the train station area. Besides the food and drinks, there were a couple of fun things here. There was a coloring station for the kids, with an activity book based on The Lion King. This was also where you could take a virtual safari. You put on a headset and could get a look up close at the three lions who call Disney’s Animal Kingdom home. I chatted with a Cast Member about this. She said that they used a 360 degree camera to get the shots. It was recorded early in the morning, which is why the lions were so active.

One word of warning about the stop at Rafiki’s Planet Watch. Since you stay near the train station, the area’s restrooms are not open. If you’re visiting with little ones you might want to make a pit stop before getting on the train.

Next it was a train ride back to Africa. We headed to Harambe Market, which was closed to the other guests and roped off. This is where the main part of the meal was served. There were stations that featured five different animals; Rhinoceros, Leopard, African Lion, Cape Buffalo, and African Elephant. The foods at each station were described in the passport, and there were also descriptions at the stations. There were plenty of Cast Members on hand as well to answer questions. In addition to the five animals represented, there was a kiosk with desserts. You could also get a frozen pop, spiced popcorn, and shaved ice. Circle of Flavors was certainly not lacking a variety of food! There were nonalcoholic drinks in several areas, and there were a couple of bars for those of age.

The Harambe Market location definitely had a party feel to it. There was a live band, and many of the guests danced. I have a feeling that there would have been more dancing, but we were hit with some rain. Disney even had a plan for that! A good part of Harambe Market is covered, so if you were eating or watching the band you did not have to worry about getting wet. There were also Cast Members with umbrellas, ready to escort guests from one place to another if they were in the rain.

Circle of Flavors ended with a souvenir glass. It’s a fun event, and perfect for someone who wants to spend a relaxing evening after a hectic day at Disney’s Animal Kingdom. Even though there was a lot of alcohol, it is a family friendly event. There were several families with young children there and they all seemed to be having a great time.

There were two things that stood out to me about Circle of Flavors. First, the entertainment was fantastic. The band seemed to be having as good a time as those who were dancing to their music. Second, the Cast Members were exceptional! I was there alone, so I struck up conversations with several different Cast Members. They all had smiles on their faces, they were friendly, and they seemed like they wanted to make the experience as good as possible for the guests. These Cast Members were some of the best that I’ve come across, and that is saying a lot.

I’d like to thank Disney for inviting me to check out Circle of Flavors: Harambe at Night. It was a great experience. If you’re interested in attending, it runs on select Wednesday evenings until October 23. The cost is $125 per person for anyone over ten, and $99 for a child from three through nine. The price includes a lot of food and drink, including alcohol for those 21 and up. Disney’s Animal Kingdom admission is not included in the price, but is necessary to attend.