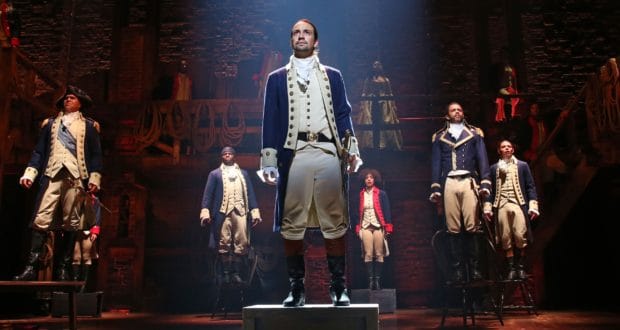 That’s right people! This is happening! Disney announced on Twitter today that the original Broadway production of Hamilton, filmed live onstage, is coming exclusively to Disney+ on July 3rd. And yes, we’re shouting from the rooftops!

This was a surprise indeed! Hamilton is a musical with music, lyrics, and book by Lin-Manuel Miranda that tells the story of American Founding Father Alexander Hamilton. The Broadway music is a perfect blend of hip hop, R&B, pop, soul, and traditional-style show tunes… making it an extremely unique and impressive Broadway musical.

Even though Hamilton first began five years ago, it still has repetitively sold out shows making it nearly impossible to find tickets. The music, the cast, and the stage production are the reasons for it’s many awards and extreme popularity.

As noted below, Lin-Manuel announced on Twitter back in February that the original Broadway film would debut in theaters on October 15, 2021.

So, for it now to be launched on Disney+ on July 3 is a huge deal! If you’re Hamilton fans and don’t already have Disney+, our guess is you’re looking to add it to your streaming before July 3. We know it’s on our calendars and we’ll have the popcorn ready!

2020-05-12
Jamie Sylvester
Previous: Get Ready to Roll With This BB-8 DIY
Next: List of Disney Springs Restaurants Reopening on May 20