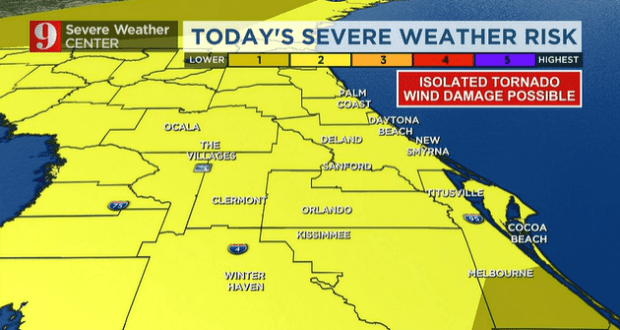 The National Weather Service has issued a Tornado Watch for several counties in Central Florida, and as of 1:00 p.m. ET, the watch was expanded to include the counties of Orange and Seminole. The watch expires at 5:00 p.m. ET this evening. 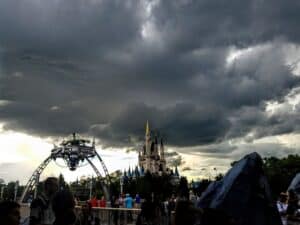 The Walt Disney World Resort is located in southwestern Orange County, so the watch now includes all –of Disney World’s property, including the parks and the Resort Hotels.

Yesterday, we reported that severe and potentially dangerous weather had been forecast for Central Florida for today, including rain, thunderstorms–some of them possibly severe–and increased winds of up to 20 miles per hour. As of yesterday, there was no mention of the possibility of tornadoes, but now the condition is such that the possibility exists.

Remember that a “tornado watch” means conditions are conducive to the forming of a tornado, and a “tornado warning” means that a tornado has been spotted by storm trackers or by local radar. Often, when there is the threat of severe thunderstorms, a tornado watch will also be issued, as the conditions under which both take place have many similarities. (When you grow up in Tornado Alley, you’re taught watch vs. warning almost before you’re taught to read and write!) 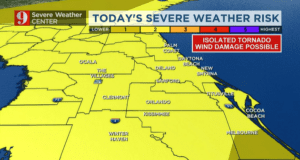 The latest forecast shows a possibility of up to 1/2 inch of rain in the Orlando area and as much as 2 inches of rain possible in cities to the north like Jacksonville.

No matter what you have planned at Disney today, be safe, and have a great time! You’re at Disney World after all! 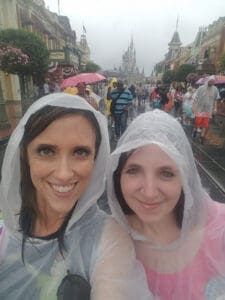 If you’re visiting the parks at Walt Disney World today, be sure to take an umbrella, poncho and even a dry pair of socks and/or shoes to change into after the storms pass, should you get yours wet while navigating the parks. It can also be helpful to have a plan for what you might enjoy doing in the parks, should outdoor attractions be temporarily closed or unavailable because of the storms.

Do you have plans to be in the parks today? Let us know what you hope the rain doesn’t ruin for you!

2021-10-28
+Becky Burkett
Previous: Was a Time Capsule Supposed to be Opened at Disney’s Contemporary Resort?
Next: As Disney Struggles, Universal Theme Parks Thrive