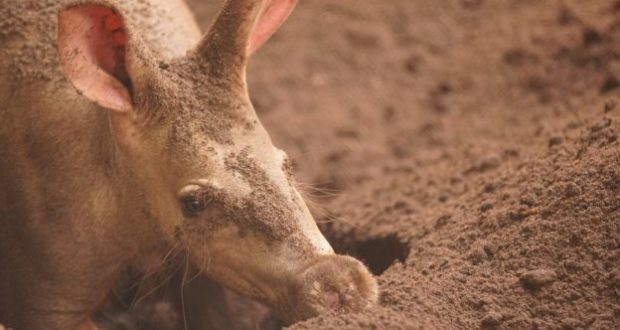 A new episode of “Magic of Disney’s Animal Kingdom” hit Disney+ on Friday! This episode shares all sorts of aardvark curtness with a dash of rhino and manatee love. While there are noted spoilers below, we just have to share the excitement that resulted from the aardvark couple you’ll see in the episode. Check out all the details and photos below as shared by DisneyParksBlog.

Once upon a time, a male aardvark named Willie met his match – a female aardvark named Peanut. The pair soon had their first date, and there was magic in the air. After several months, the perfect pair became a perfect trio, and the rest, as they say, is history.

Meet Karanga, a female baby aardvark born earlier this month at Rafiki’s Planet Watch at Disney’s Animal Kingdom Theme Park. She is the first baby aardvark in her family – and in the park’s history, and keepers decided to name her after mom – Karanga means “Peanut” in Swahili.

You can watch the beginnings of this family story unfold in the latest episode of “Magic of Disney’s Animal Kingdom,” produced by National Geographic and now streaming on Disney+. The animal care team was along every step of the way of Willie and Peanut’s relationship journey. In fact, they played a role in pairing them together as part of a Species Survival Plan (SSP), which is like a matchmaking service designed to help ensure healthy future generations for endangered and at-risk species.

A lot of thought and careful preparation went into Willie and Peanut’s blind date. In fact, seasoned animal care team members Missy, Elizabeth and Jennifer – who have a collective 60+ years of animal care expertise – used their know-how to create a special pre-date spa day for Peanut. Here’s a closer look at their “girl time” together:

The team was excited and a little nervous when the pair first met. With Peanut fresh and ready to dig in the dirt, would Willie want to join her? Would there be a spark?

Fortunately, yes … it was love at first snout, which led to future dates and… well, nature took over.

Speaking of nature, aardvarks are a great example of diversity in the animal world and how a species adapts to its environment. These animals, from Sub-Saharan Africa, are perfectly equipped for rooting and burrowing in sand and dirt. You can see, Karanga has a long snout and tongue, just like mom and dad, that, as an insectivore, will eventually help her sniff out and devour up to 50,000 insects in one night.

Dr. Beth has spent decades providing care for all kinds of mammals here and around the world – in fact, she just celebrated her 25th anniversary in veterinary medicine. Aardvarks hold a special place in her heart and she is very pleased with what she sees in the baby’s health and development so far. Within a few hours after her birth, Karanga had already started digging around in the dirt. This innate skill is important because it’s how aardvarks not only find food, but also how they build the burrows they live in to keep cool.

Check out @drmarkatdisney on Instagram and @DisneyASE on Facebook for more behind-the-scenes content from our animal keepers and fun facts about the 5,000+ animals who call Walt Disney World Resort home. And take the fun with you when you download this week’s activity page.