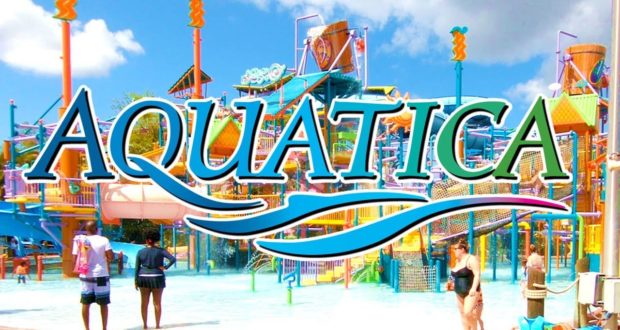 The Disney Water Parks have been closed since March, so we recently decided to see how other local water parks are handling the new normal with COVID-19. We spent the day at Aquatica Orlando, which is SeaWorld’s water park. Here is what we noticed during our day.

You are required to have a reservation to enter, which they were very strict on. They made sure we had our ticket and reservation paper all ready to go when we arrived at the front gate. They are doing temperature checks, and you are required to correctly wear your mask while going through temperature check and the front gate. They did then tell us that we could take the masks off once we went through.

Aquatica has not announced the exact capacity, but the crowds were down. They made announcements over the intercom saying that masks are required while walking around, but are not allowed in pools or on slides. From what I saw maybe ten percent (if that) were following that rule. I’m not exactly sure how you’re expected to wear one walking around but not in the water, unless you had multiple disposable masks that you throw out before getting in. Even then you would need to keep going back to your belongings to get a new one, or keep them with a nonrider. It was unclear to me how we were supposed to follow that rule.

It is thought that COVID-19 spreads less outside and in the sun. It’s hard to space guests apart in the wave pool and Roa’s Rapids, which means sometimes we were less than six feet from others. Many times I witnessed guests accidentally bumping into each other. You could definitely smell the chlorine in the water, though, which is a germ killer.

While waiting in line for slides they had markers on the stairs that were six feet apart. They were not labeled, it was just the piece of blue tape. Unfortunately, I did not see anyone following this rule, and there were large lines of people. While standing on the stairs we had people standing right behind us. They also told us that for one of the slides that you could pair up with another group if you didn’t have enough people, which I was not comfortable with. They do have hand sanitizer before you get on and after you get off, but they were not enforcing using it. I did see many people use it.

I did not get any food at the park, but did look to see how it was being handled. They have social distancing markers on the ground by the food places, and from what I could see people were using those. They were clearly marked, which I feel like they needed to do for sides instead of just blue tape. It also seems like they are doing cashless payments only, which is a good way to stop the spread of germs. You are required to wear a mask while going inside any of the shops and restaurants. Tables were also spaced apart.

For those who aren’t strong swimmers and children it is recommended that they wear a lifejacket, which are provided for free. There were areas where you were supposed to leave your used lifejacket to be cleaned. I noticed several places where guests would just drop their lifejacket anywhere after wearing it, and other guests were picking them up and using them immediately after. I feel like Aquatica was trying to not let this happen, but that was what I observed.

Outside of the wave pool they have chairs and those were spaced six feet apart. People were following social distancing guidelines, and groups were spaced out. It looked like the employees were trying to clean a lot, but weren’t always able to between each party.

I’ve honestly been so blown away with how Walt Disney World has handled their parks reopening that I was a bit disappointed with Aquatica. I do think that is because Disney has set such a high standard. Did I feel like I was in danger? No. Was I closer to some people than I would prefer to be today without wearing masks? Yes. The fact that the crowds were down made a huge difference, and I give the park a lot of credit for limiting capacity the way they have. I do feel like they are trying, but wish they would enforce their rules more. If all of the new procedures were followed, then I would be giving the water park a much better review. I don’t think I’ll go back to Aquatica until COVID-19 cases go back down in Central Florida. I do look forward to seeing how Disney handles everything when their water parks reopen.  Knowing Disney, it will be extra magical and clean.