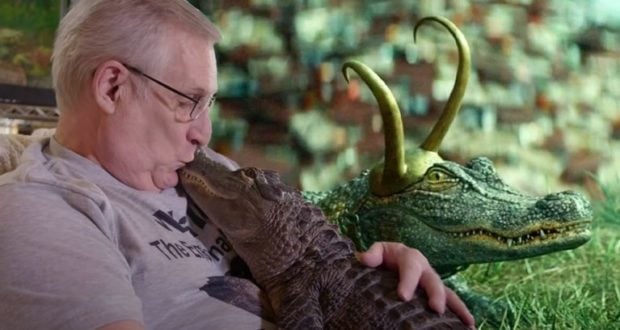 Alligator Loki quickly became a fan favorite following episode 4 of Loki. Fans continue to debate if Alligator Loki is a Loki variant or simply an alligator. Loki writer Michael Waldron is fine letting fans speculate on their own.

One big reveal about the character is that Alligator Loki was inspired by a real-life support animal named Wally. The 5ft, 60-lb alligator is a federally licensed emotional support animal who loves cuddles and kisses and helps his owner, Joie Henney, with his depression.

Alligator Loki was created largely by CGI, but the creators did need a reference on how an alligator would move and look.

Wally not only is the inspiration for Alligator Loki, but this is also an excellent way to get Wally’s story told. The idea of an alligator being an emotional support animal is hard to believe; however, Wally has undeniably helped and supported his owner. Meanwhile, Henney takes good care of Wally and the many other alligators and reptiles that he rehomes.

Alligator Loki was a fun addition to the series and we hope he will appear again in season two.