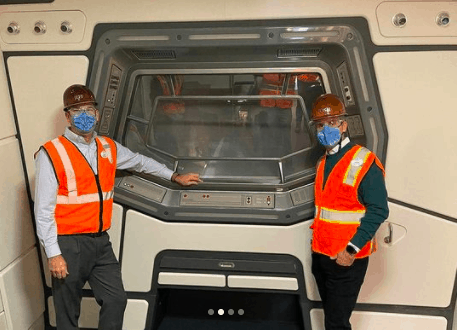 As soon as Disney announced the Star Wars: Galactic Starcruiser we have been dying to see what it would look like. Disney has released concept art; however, this week on Instagram both Jeff Vahle, President of the Walt Disney World Resort and Josh D’Amaro, Chairman of Disney Parks, Experiences and Products showcased some photos of the nearly completed rooms and they look fantastic.

Vahle posted his thoughts along with the photos:
“@joshdamaro and I enjoyed a sneak peek into the great progress the @WaltDisneyImagineering teams are making on Star Wars: Galactic Starcruiser here at WDW. Inside we visited The Atrium and looked out The Bridge windows to what will be a galaxy far, far way. We even checked out the cabins in progress, including their windows to space seen in these renderings.”
#maytheforcebewithyou
#WaltDisneyWorld
#StarWars#GalacticStarcruiser

Taking a look, the theming looks stunning and a lot like the concept art previously released. Although these bunk beds will be a hit with kids, we wonder how big they actually are as the pictures make them look smaller than normal.

This immersive hotel will allow guest to be a part of the Star Wars story as even the windows will look out into the galaxy. Guests will live through a pre-planned 2 night, 3 day stay storyline that included a “port excursion” to Batuu and all the excitement and thrills found there.

We can’t wait to see what else will be coming with this hotel. It is sure to be like nothing we have seen before.