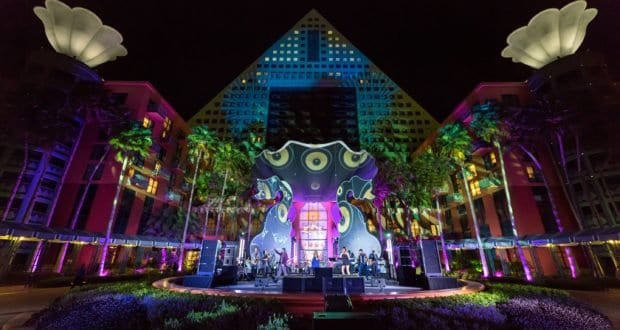 A Preview of the Swan and Dolphin Food & Wine Classic

The Swan and Dolphin Food & Wine Classic is just around the corner! This fall classic is celebrating its 12th year on October 29 and 30. You can purchase a ticket for just one evening or both. On September 21 I was invited to a preview of this year’s event. It included information from Luciano Sperduto, who is Director of Food & Beverage, and Executive Chef Dan Herman. There were also tastings of some of the dishes.

The Swan and Dolphin Food & Wine Classic features snack-sized versions of foods from several of the restaurants that are located at the Swan & Dolphin Hotels. This fall, there will also be a dish from Amare, which will be a new restaurant at the Swan Reserve. There are also a couple of booths that are popup. All of the foods come with one or more wine pairings, and it is all covered in the cost. There are also craft beers. You can eat and drink as much as you would like. In total, there will be 20 food booths and over 100 beverages.

Chef Dan said that the two most popular booths each year are Shula’s Steakhouse and Kimonos. He also informed us that the “D” in Smokin’ D’s BBQ stands for Dan. His booth is also quite popular, and he has changed up the offering a bit for this year’s fall classic. Check out two special interviews as shared via our Instagram page here!

The items that we were able to see and sample were as follows:

Beef Sliders from The Fountain

Poutine from the Beer Garden

German Chocolate Cake from the Swan and Dolphin Pastry Kitchen

Bourbon Apples from the Swan and Dolphin Pastry Kitchen

If you’re concerned about missing some of the other restaurants, don’t worry, they will be included as well. They just weren’t part of the preview. Chef Dan joked that he picked his favorites because he wanted to be able to enjoy anything leftover for lunch later. Some of the other dishes will be Angus Beef Tenderloin from Shula’s Steakhouse, Dynamite Rock Shrimp from Todd English’s bluezoo, Dragon Roll from Kimonos, and Earth-baked Kalua Pork from The Pig & The Poke. If you attend you will not leave hungry!

I was told that the stay packages are sold out, but it doesn’t hurt to call 800-227-1500 to see if something might be available. With the package, you will receive a night at the Swan or Dolphin, as well as two tickets to the event. If there is no availability, create your own stay package. Purchase event tickets and make a weekend of it. If you stay at the Swan or Dolphin you can enjoy all of the food and beverages, and then you can easily walk to your room.

If you’ve been looking for a way to enjoy the various restaurants at the Walt Disney World Swan and Dolphin Hotels, the Food & Wine Classic will allow you to do just that. Tickets cost $169 per person. You’ll not only enjoy unlimited food and wine, there is also entertainment. You will enjoy every moment and every bite!