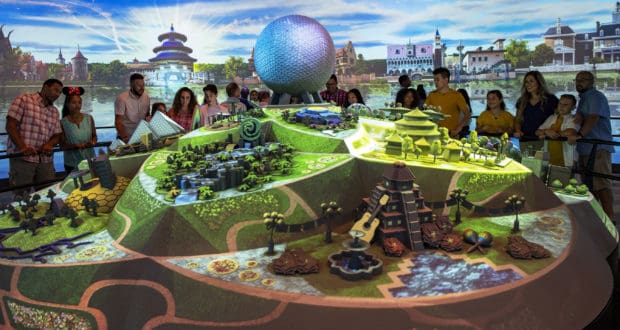 On December 3, 2019 I had a chance to take a peek at the future of Epcot as part of a hosted media group. What I saw is exciting indeed! Part of the event was seeing different things throughout the park, present and future, and then part of the event was spent as a group, learning new information. There were several things that we were not allowed to film or take pictures of, including the information session at the end.

The best place right now to see what is planned for the future is in the Odyssey Building. That is where you will find the Epcot Experience. This is a limited time attraction that allows you to actually picture what is on the horizon. There is a model in the middle of the room, with Spaceship Earth in the center of the model. Through projections and videos on the walls, you will be surrounded by what the future looks like. I have been to the Epcot Experience several times, and I will go again. There is something new to see each time.

We were allowed to experience two future attractions, at least to some extent. The first was Remy’s Ratatouille Adventure. We were taken into the attraction! It is still a construction zone, the ride is not yet up and running. Pictures and recording were not allowed, but we were able to take pictures of one of the ride vehicles later in the day. Before the ride you will shrink down to the size of a rat. We saw the boarding area, and then walked into two of the rooms that you will pass through during the ride. The first was a rooftop and the second was the kitchen in the restaurant. The attention to detail is amazing! You’ll see everything from a giant ham to a jar of peas. I have a feeling that the ride is going to be a hit.

The second sneak peek that we received was the new Beauty and the Beast Sing-Along that is also coming to France. This will be a show that runs in conjunction with Impressions de France. While there is still some tweaking to do, we saw something that is close to the final project. The film is a retelling of the classic tale, but we learn who the real hero is. Many of the original cast (including Angela Lansbury, who narrates) returned to lend their voices once again, and some of the original animators returned as well. The 14 minute show features five songs, and you are encouraged to sing along. Don’t worry if you don’t know all the words, they are on the screen. I was surprised by the amount of humor in the short film. I can’t wait to see it again. This will open on January 17, 2020.

January 17 is going to be an important day at Epcot for more reasons than just the sing-along. It is the day that Awesome Planet will debut. That will be in The Land Pavilion. Over in Canada the new experience Canada Far and Wide in Circle-Vision 360 will debut on the same day. The new film will feature the narration of Catherine O’Hara and Eugene Levy.

We were also given some great bits of information to share. We learn that Mickey & Minnie’s Runaway Railway will open at Disney’s Hollywood Studios on March 4, 2020! The new ride will be the first to feature the iconic couple at any Disney park. It will contain a new story and a new theme song. We were promised that there will be surprises around every corner.

Another thing that we learned has to do with the Star Wars Galactic Starcruiser. This is not going to be your typical hotel. Guests will stay for two days and two nights. It is going to be similar to a cruise experience. You will start at the terminal, then head into a launch pod. From there you will arrive at the starcruiser. While on your adventure you will be able to train to use a lightsaber, tour the bridge, man the guns during a space battle, and join in on secret meetings. You will leave the starcruiser on a shore excursion to Batuu. How you perform in Black Spire Outpost will affect your starcruiser journey as well. Star Wars Galactic Starcruiser will begin to transport guests in 2021.

We weren’t given an exact date, but we did receive a year for the new restaurant in Toy Story Land at Disney’s Hollywood Studios. Roundup Rodeo BBQ will open sometime in 2020. The restaurant is supposed to provide an immersive experience.

Back at Epcot, there was one other addition that we learned about that will be great for the whole family. A new adventure is on the way. It will be called Disney’s Ducktails World Showcase Adventure. We were not told the opening date. You will play using the Play Disney Parks app.

These were some of the highlights of our Epcot and more preview. Our media event lasts for two days; the second day will take place at Disney’s Hollywood Studios. Don’t forget to tune in to the live broadcast of the Star Wars: Rise of the Resistance dedication. CLICK HERE to link to the dedication ceremony at 6:55pm ET on December 4. It is going to be incredible.