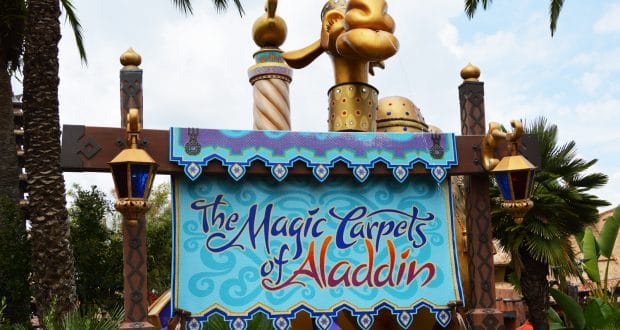 The Magic Kingdom is an incredible place to visit, no matter what your age is. That doesn’t mean that everyone can do everything. Some rides have height restrictions, so not everyone will be allowed to ride. That doesn’t matter, there is still plenty to keep the younger members of your party occupied. Here are nine awesome attractions without height limits that they will love. It’s assumed here that the child is old enough to know what is going on.

These are two very different attractions but they both have a similar purpose; your kids will be able to get rid of some of that pent up energy from waiting in so many lines. Both attractions faithfully recreate stories that many little ones may not yet know, but that’s easy enough to change. Tom Sawyer Island has paths that your kids will want to explore. Swiss Family Treehouse will bring out your child’s imagination. One thing to remember about the latter; there are 116 steps to climb before you get there. If your kids can’t handle the climb on their own you might want to direct their attention elsewhere, or else you’ll end up with sore arms from carrying them.

Who doesn’t want to ride on a royal horse? Your kids will love going up, down, and around, while you will also enjoy the beauty of the craftsmanship. There are 90 stately horses and one chariot to ride on. Make the experience even more magical by riding at night. The lights will make for a breathtaking experience for your little prince or princess.

You might want to use a FastPass+ for this one, because the ride is incredibly popular. Climb aboard a pirate ship and fly above London while you relive Peter Pan’s adventures. Your little darlings can join the Darling children in their fun. If FastPass+ isn’t an option for you, ride as early in the day as you can. The line will get long.

This is the perfect ride for any Walt Disney World family. The kids will like riding on a boat and will love the animals, even if they’re not real. You’ll enjoy the corny jokes from your skipper. The adventure lasts about ten minutes, and that’s ten minutes that you’ll be able to sit down. Jungle Cruise is a Disney Parks classic that your family needs to experience together.

Kids love to spin round and round in circles. Mad Tea Party will allow them to do just that! Each teacup seats up to five guests. You’ll go around in more than one direction. If you don’t want to spin quite as much you can control your teacup somewhat with the wheel in the center. If you have a problem with motion sickness, you might want to let another member of your family ride with the smaller kids.

4. The Many Adventures of Winnie the Pooh

Winnie the Pooh is a first friend to countless children. They sleep with a plush version and they learn the stories in their parents’ laps. That is what makes The Many Adventures of Winnie the Pooh a perfect ride for small children. You’ll climb aboard a honey pot and travel through scenes from A.A. Milne’s classic. The line can grow long, especially in the middle of the day, but you might not want to use a FastPass+. Kids love the interactive queue. Some kids love the queue so much that they don’t want to move forward when the line moves.

Kids and water seem to go hand in hand, especially on a hot summer day. That’s why you’ll want to stop by Casey Jr. Splash ‘N’ Soak Station. This splash area is based on the circus train from Dumbo. Your kids can burn off some steam and cool down, while you sit and relax for a little while. Better yet, join them and get soaked yourself. After all, Walt Disney World can bring out the kid in anyone.

When the Magic Kingdom first opens for the day, many people rush to get in line for one of the park’s thrill rides. There is another group who will instead walk quickly (no running) to the back of the park to get in line for Dumbo the Flying Elephant. The iconic ride will allow you to fly through the air on the famous elephant’s back. With the Fantasyland expansion Dumbo got a bit of a makeover for the better. A second carousel was added (they go in opposite directions), which doubled the ride’s capacity. The wait was also taken indoors, out of the sun. You’ll be given a pager which will tell you when it’s your turn. The kids can play under the big top, while you enjoy the air conditioning. It’s one wait that you might want to last for a while.

A slow moving boat ride and dolls that represent many different cultures; It’s a Small World is the definition of classic ride. The original is a creation of Walt Disney himself, and there is a version at every Disney resort in the world. The ride both celebrates diversity and also brings cultures together at the same time. Yes, the song will get stuck in your head, but is that such a bad thing? Think of how much you’ll love hearing your little ones sing it long after you’ve returned home. Love, compassion, getting along through differences; most people could learn a lot from It’s a Small World.