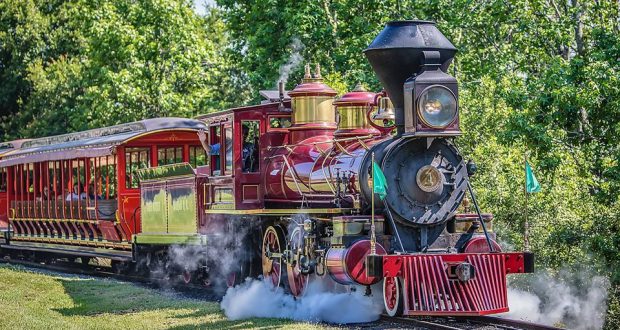 “Your attention please—the Walt Disney World Railroad now boarding for a scenic trip around the Magic Kingdom! All aboard!”

Every time I hear this announcement, I know I’m at my happy place again. And I’m happy indeed. This is the conductor’s greeting to Guests of the Magic Kingdom awaiting their opportunity to board one of the beautiful train cars of the Walt Disney World Railroad. You don’t have to be a train enthusiast to appreciate the stately locomotives and cars that make up the trains that take Guests on a 1.5-mile scenic journey around the Magic Kingdom. Here are 8 really cool things about the Walt Disney World Railroad (WDWRR) that will have you wanting to board again and again the next time you visit the Magic Kingdom.

8. It all started with Walt’s love of trains.

Walt Disney was a train fanatic. He loved trains so much that he built a railroad in his backyard. He named it the Carolwood Pacific Railroad, and it was a 1/8 scale train that boasted a custom-built steam-powered locomotive. The track encircled his property, and he loved everything about his own personal railroad. Walt wanted to share his love for trains on a grander scale. Thus, the Santa Fe and Disneyland Railroad was born inside Disneyland in California, and it has been popular with Guests since the park opened in 1955.

7. It only services the Magic Kingdom.

6. There’s no such thing as “missing your train.”

Because there are three locomotives in service with four cars each, that are scheduled to arrive at a station every 4 to 10 minutes, Guests never have to worry that they have missed the train. If you don’t get on this one, never fear; another train is on its way!

5. The locomotives are named for people who played integral roles in Disney World’s history.

4. There’s an “Easter egg” at one of the stations.

In the world of Disneyana, an “Easter egg” is a hidden surprise within a Disney film or a Disney Parks attraction, and there is one inside the Frontierland Station of the Walt Disney World Railroad. Among the props at the station, Guests can see a wooden leg named “Smith,” which is a nod to Disney’s 1964 musical, Mary Poppins. If you’re unfamiliar with this reference, watch the musical, and pay special attention to the scene with the tea party on the ceiling.

3. Every Disney park has a railroad.

Walt Disney was such a lover of trains, railroads, locomotives and the like, that every Disney Park in the world has a railroad on its grounds as a way of keeping Walt’s legacy of loving trains alive and well.

2. There are three stations inside Magic Kingdom.

Inside Magic Kingdom, Guests can board or disembark at three different train stations. The first is just inside the park gates at Main Street U.S.A. If you board at this station, your first stop will be at the Frontierland Station (look for that wooden leg!). Once the train leaves the Frontierland Station, it steams ahead to another stop—the Fantasyland Station. No matter the station at which you choose to board, you’re guaranteed a beautiful scenic tour around the Magic Kingdom.

1. Take a look behind the scenes.

If you are a train enthusiast like Walt Disney was, you can take advantage of the “Magic Behind our Steam Trains” tour. This three-hour walking and riding tour takes Guests behind the scenes of all things pertaining to the Walt Disney World Railroad, including seeing how they are maintained and cared for. The route around the Magic Kingdom is also discussed. Book this tour by calling (407) WDW-TOUR.

Whether you have loved trains since you were young, or you’re just looking for an alternative way around the Magic Kingdom, you’ll love the trains at Walt Disney World, and so will your family! All aboard!