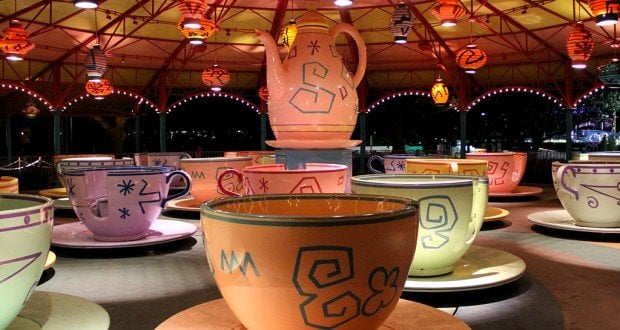 Mad Tea Party is a must-ride Disney World attraction. This makes total sense—after all, what’s more magical and downright “Disney-fied” than hopping in a giant teacup and riding circles around an enormous teapot holding a favorite character from a favorite movie? Still, no matter how many times you ride this classic ride, it’s always made more fun by having some juicy facts to share with friends and family as you whirl and twirl and hope your lunch doesn’t come back up. That’s why we’ve compiled this list of super fun and totally cool facts about the Magic Kingdom teacups. Drink them up and get ready for your next “unbirthday” celebration spent riding on Mad Tea Party!

It would seem that Mad Tea Party really loves opening days, and really, who can blame it? This ride has been around since the very beginning in four of the Disney parks, giving guests spinning thrills ever since. In fact, the only teacup ride that wasn’t available to guests the day its respective park opened was the one in Tokyo. Guests in Japan had to wait a full three years to get their version of this classic attraction.

Although this ride was open to the public on opening day in Disneyland in California, it wasn’t without its issues. In fact, the ride developed cracks very easily in the early days, and maintenance crews would spend around 2 hours each morning welding cracks in the system to make the attraction guest-ready. Fortunately, the problem was resolved eventually, leaving those crews free to handle other things.

In 2005, Disneyland celebrated its 50th anniversary. In order to honor the few opening day attractions remaining at this park, each one was outfitted with a golden ride vehicle. Because Mad Tea Party is one of the remaining opening day rides, it got a nice, shiny, golden cup that was likely the cause of many arguments as everyone clambered to ride on the special cup.

A version of Mad Tea Party can be found in five different Disney parks worldwide. The only Disney resort property that doesn’t feature a Mad Tea Party ride at this point is Shanghai Disneyland, where the closest match is a Winnie the Pooh-themed spinning ride aptly named “Winnie the Pooh”.

Did you know that when the teacups first opened in Disneyland, there were absolutely no brakes or clutches to slow the speed of your vehicle? This means that guests could spin the cups ridiculously fast, and many probably reached dangerous speeds. Fortunately, a mechanism was eventually added to slow the vehicles, making them a much safer attraction. Still, sometime in 2004 a rider fell from a spinning cup. This prompted Disney to slow the top speed of the ride even further. This was met with cries of protest however, and the parks soon brought the ride back to its pre-2004 speed.

There are very few places in Disney World where you can actually hop on a ride with a Disney character. Mad Tea Party is one of them. Of course, you have to be in the right place at the right time, but if you’re very, very lucky, you might just get to hop into a cup with Alice or the Mad Hatter, making for a fabulous unbirthday surprise!

If you’ve ever ridden “It’s a Small World”, you may notice that the teacup designs remind you a bit of the colorful, fun, and bold designs found in the well-known boat ride. This is because the same person designed both. Mary Blair was one of Disney’s favorite designers, and did much of the early design work throughout the parks.

Have you ever timed your ride in the teacups? If you did, you’d be surprised to learn that what feels like ages of spinning is actually only about 90 seconds. This is incredibly short for a Disney ride. The only rides in Magic Kingdom that meet Mad Tea Party at the 90-second mark are Astro Orbiter, Dumbo, and Magic Carpets of Aladdin. The only one that’s shorter is Barnstormer, which comes in at 63 seconds.

There you have it, folks! 8 super cool facts about one super cool ride. Be sure to share this info with your family and friends the next time you find yourself queuing up to take a spin in a teacup!