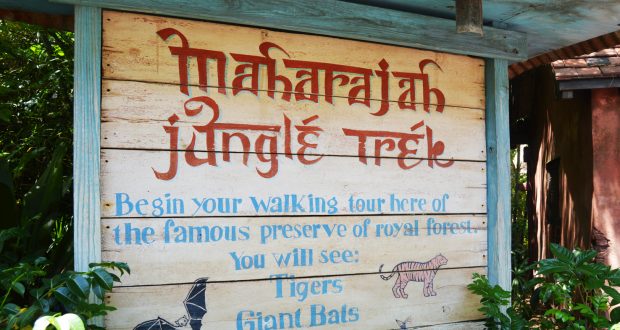 When you’re ready for a change of pace from the lines, crowds, and Fastpasses, a great family-friendly option in Animal Kingdom is the Maharajah Jungle Trek. You won’t have to line up to get in, and you’ll be able to see exotic creatures in picturesque settings, sometimes just a few feet away! Here are 8 totally cool things about Walt Disney World’s Maharajah Jungle Trek.

The animals are the main stars of the Maharajah Jungle Trek, and for good reason! Guests are treated to excellent views of several different animals native to various regions of Asia throughout the self-guided trek. And because this isn’t a ride or a guided tour, you can spend as long as you like watching your favorite animal, or following it from viewing platform to viewing platform. Creatures you’ll encounter include gibbons, tigers, komodo dragons, and our favorite, the huge Malayan flying fox, with a 6-foot wing span (don’t worry, it eats only fruit and nectar)!

While the animals themselves steal the show at this attraction, the picturesque setting itself would be worth a visit, even without animals! The trek takes place in a gorgeously-themed labyrinth full of overgrown jungle foliage, waterfalls, and crumbling temple ruins. It’s modelled after locations in Asia, so you’ll find prayer flags blowing gently in the breeze, stone statues honoring deities, stone relief art, and even a tree adorned with bells, symbolizing prayers that have been answered. It’s simply stunning, and it’s a wonderfully relaxing break from the rest of the park!

6. Birds of a Feather

It’s a thrill to wander through the trek’s extensive aviary with your identification guide in hand, trying to spot some of the more-than-50 species of birds that call this attraction home. Like the other animals here, they’re all from different parts of Asia. Some of them live in trees, others prefer the ground; some are tiny, and some definitely are not! You’ll see peacock pheasants, king parrots, Indian pygmy geese, fruit doves, masked plovers, and more, often just a few feet away from you. Take some time to really look at the dense foliage – and the intricate Asian birdhouses – to up your chances of spotting these beauties.

For guests interested in doing more than snapping a few quick shots with resident animals, there are observation stations where you can find out more about the wildlife you see. We’ve found cast members to be extremely knowledgeable, so ask away! You can also discover the conservation efforts underway globally to protect your favorite species; in some cases (such as the tiger), critically endangered species are slowly being brought back from near-extinction.

As with most Disney attractions, the Maharajah Trek has quite the backstory! Imagineers drew on the Indian practice of letting nature overtake temples and palaces, to give them back to the Earth to be used by all of its creatures. They came up with a story about a Maharajah who established this land as hunting grounds, only to be killed in a hunting accident. The area was then turned into a nature preserve by his family, where residents would come to honor the Maharajah and his family. There are murals along the trails that tell the story, and if you look at the tiger enclosure, you’ll see that the old palace and hunting lodge in the story have become their royal home now!

While it’s similar to the Pangani Forest Exploration Trail, the Maharajah Jungle Trek doesn’t get as crowded, which makes this perfect attraction to experience mid-day, when other areas of Animal Kingdom are congested. The only drawback is that many of the trek’s animals aren’t typically as active in the afternoon, so you may not see as much in the afternoon. To maximize your animal encounters, it’s best to visit early in the morning, or early evening, when it’s cool and/or the animals are waiting for their dinner!

While keeping an eye out for elusive animals, make sure you remember to look for Hidden Mickeys, too! There are plenty within the Maharajah Jungle Trek. The most obvious one is on one of the beautiful murals illustrating Asian hunts on the walls of the ruins; one of the hunters very clearly has a Hidden Mickey as his earring! Eagle-eyed guests will find more Hidden Mickeys within the murals, and others in the stone carvings in the aviary, and more in the ruins where you view the tigers. You may even catch some that we haven’t spotted!

Something that we always appreciate about the Maharajah Trek is that at no point does it resemble a zoo in any way. Disney Imagineers have gone out of their way to create natural-looking environments for all the animals that live within this attraction. The jungle-esque surroundings are very similar to what these animals would call home in the wild, and the animals are given plenty of space to roam and run. The carefully designed stone ruins, water features and foliage make you feel like you are truly stumbling upon these animals in the wild!