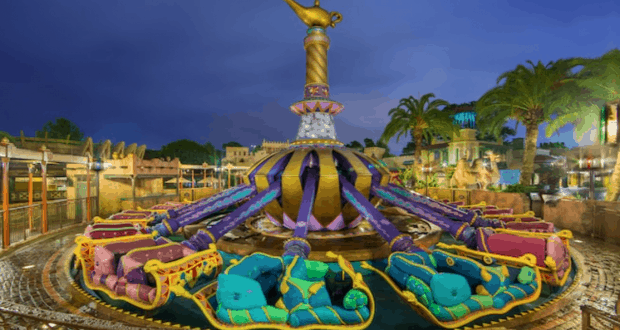 Aladdin is one of the classic Disney animated films many of us remember from our childhoods. Whether or not you hold it near and dear to your heart, the truth is that the film doesn’t have nearly as much presence in the WDW parks today as fellow-era films like The Little Mermaid and Beauty and the Beast. Not to be deterred by this fact, we’ve decided to express our joy for this film by seeking out and sharing 8 cool facts about the one Aladdin-themed ride in all of Walt Disney World: the Magic Carpets of Aladdin, located in Magic Kingdom’s Adventureland. Follow us as we take you on a magic carpet ride over the streets of an Agrabah bazaar!

That’s right, the Magic Carpets of Aladdin was the first permanent Aladdin-themed attraction in all of Walt Disney World. All the more reason to enjoy it while it lasts! (Not that we have any news on that front; you just never know with these things.)

Unlike the Dumbo the Flying Elephant ride over in Fantasyland—which the magic carpets often get compared to—you can do more than merely control the height of your carpet from the front seat. Riders in the back seat can press a magic scarab button up or down to tilt the carpet forward or backward, adding a whole new dimension to an already fun ride. As you stand near the magic carpet ride, take note of the two jumbo-sized golden camels—one at the entrance and one that’s part of the ride. What’s interesting about them is that they were originally part of the “Aladdin’s Royal Caravan” parade, back when Disney’s Hollywood Studios Park was known as Disney-MGM Studios. When the parade was replaced by another, the camels were moved to the entrance of the Soundstage Restaurant for a while before eventually being permanently relocated to the Magic Carpets of Aladdin ride, where they’re still entertaining guests to this day.

Speaking of those camels, you’d better watch out whenever you get in range of their faces, because they have a tendency to “spit” on guests. If you aren’t careful, you might just find yourself getting squirted by one of these unruly creatures as you walk by the one near the entrance or fly on a carpet in front of the other one (which is around mid-height, so fly high or low to avoid it). While it’s easy to compare Magic Carpets of Aladdin to other rides of this type, did you know that it has actual sister rides in other parks? Over in Tokyo DisneySea, they’ve got Jasmine’s Flying Carpets, which sports an even more ornate centerpiece. And at Walt Disney Studios Park at Disneyland Paris, you’ll find Flying Carpets Over Agrabah, which is essentially a direct replica of the one in Magic Kingdom.

Before the opening of the Magic Carpets of Aladdin in May 2001, Adventureland hadn’t seen a new attraction since Pirates of the Caribbean opened in December 1973. That’s nearly 28 years! We’re sure guests were absolutely thrilled to have something new to do in this area of the park.

Whereas the Dumbo the Flying Elephant ride features an ornate circus-themed centerpiece adorned with storks, the Magic Carpets of Aladdin fly around a magic lamp atop a giant genie bottle. You’ll immediately recognize the magic lamp as the one from the animated film, and if you look closely at the lamp, you’ll notice the friendly faces of Genie and Abu! At just 1.5 minutes long, the ride duration of the Magic Carpets of Aladdin attraction is among the shortest in Magic Kingdom, matched only by Astro Orbiter in Tomorrowland, Mad Tea Party in Fantasyland, and—you guessed it—Dumbo the Flying Elephant. This makes it a great option for when you’re looking to fill time between two attractions and/or FastPasses, and if the line’s short enough, you can probably even ride it multiple times in a row!

We bet you didn’t know there were so many interesting things to know about the Magic Carpets of Aladdin, did you? Now that you’re in the know, we wouldn’t blame you if you put this classic ride at the top of your list for the next time you’re in Magic Kingdom. Be sure to go on a hot day if you can, because those “spitting” camels might just be able to help you cool off!