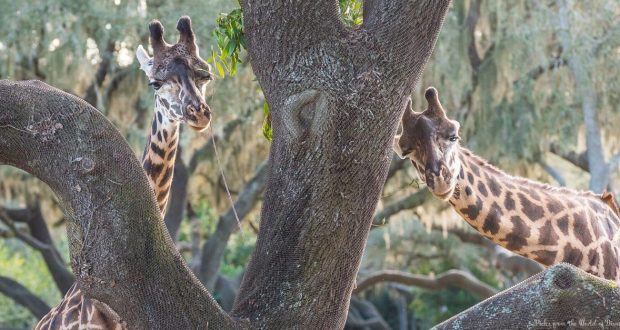 The dream of using African animals at Disney goes all the way back to the inception of Jungle Cruise at Disneyland, before Disney World even opened.  Originally, Walt Disney’s goal was to populate Jungle Cruise with real animals, but for various reasons (including the unpredictability of the animals), animatronics were used instead. Only decades later did Imagineers finally realize Walt’s dream of an attraction with live African animals by creating Kilimanjaro Safaris at Animal Kingdom.

7. All About the Animals

Dozens of animal species call Kilimanjaro Safaris home, including some endangered species, like the black rhino.  Disney doesn’t get them from the wild, but rather from reputable zoos and breeders.  Imagineers creatively placed fresh water, salt licks and food sources like hay and grass near the road to persuade the animals to stay close to the vehicles where they’re visible.  Temperature is also used (for example, air-conditioned rocks) to encourage animals to remain visible to guests.

If you’ve ever lamented the fact that the lions at Kilimanjaro Safaris aren’t very entertaining during the day, you’ll be thrilled with the ride’s latest addition: nocturnal safaris.  Yes, it’s now possible to ride this attraction at night, to get a whole new look at African animals who aren’t active during the day. Kilimanjaro Safaris, and Animal Kingdom in general, have previously been off-limits to guests after dark, so there’s a whole new world to explore!

If you’re like me, you’ve probably wondered at some point how Disney got acacia and baobab trees, native to Africa, to grow in Florida.  In fact, throughout the attraction, oak trees are trimmed to resemble acacias, and none of the baobabs on safari are real; they’ve all been created by Imagineers (and often have surveillance cameras in them!).  The same goes for the “safari road” – it’s actually colored cement, with tire tracks, dirt, twigs and animal tracks pressed into it, to make it look like a dirt road on an African reserve.

Sharp-eyed visitors may sometimes notice black vultures relaxing on the plains; these birds are not African at all.  They’re Florida natives, and are not part of attraction.   Keep an eye out for the flamingo island on your safari, because it’s shaped like a giant Hidden Mickey.  The piece of music you hear towards the end of the ride is sung by a group called “African Dawn” and is called “Hapa Duniani”, which is a Swahili version of the Lord’s Prayer.  Finally, Kilimanjaro Safaris is so big (the largest Disney attraction on property, by area) that the Magic Kingdom could fit in it!

When you leave each habitat, you’ll notice your vehicle travels over chains in the road.  These chain road sensors, coupled with bars, keep animals safe in their own sections of the attraction.  You won’t see any fences, but Disney employs creative, often hidden, boundaries like moats, natural barriers, and water features to prevent animals from leaving their sections, as well as wires and cattle guards.

The guides we’ve had at Kilimanjaro Safaris have been some of our all-time favorite cast members.  After all, they not only have to navigate their vehicles through the savannah while informing guests about the animals – they also spot hard-to-find animals for guests, and crack animal jokes along the way.  Disney cast members count themselves lucky to work at this attraction, as it’s one of the most popular spots on property to work!

Guests who can’t get enough of Kilimanjaro Safaris will want to take advantage of the Wild Africa Trek.  During this 3-hour private safari, you’ll access areas you don’t get to see in the 20-minute attraction.  You’ll see your favorite African animals up close, while a photographer snaps shots for you.  There’s even a post-safari gourmet meal with an African-inspired menu.