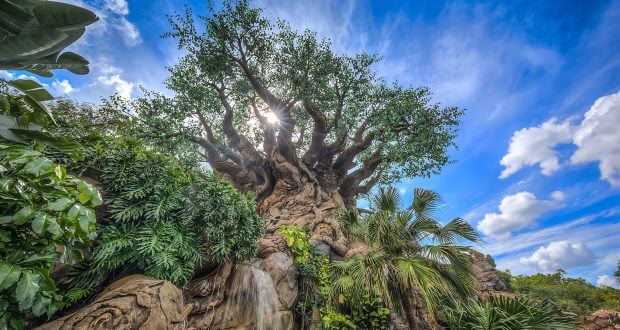 The youngest of the Disney World theme parks has been a hub for animal lovers, animal enthusiasts and conservationists for the last two decades. Using a mix of interactive attractions, exciting exhibits and fun animal encounters—all with a Disney twist—Animal Kingdom engages Guests in understanding the importance of conservation to our planet and gives Guests an intriguing view into the world of fish, mammals, birds and more. Don’t mistake Animal Kingdom for Disney’s version of a zoo. There’s so much to see, do and experience in this park that it’s hard to decide which area of the park to enjoy first. Next time you’re at Animal Kingdom, start your exciting adventure at Discovery Island—here are 7 things you’ll absolutely love about it!

The Tree of Life stands as the familiar icon of Disney’s Animal Kingdom. It took over 18 months to complete. And though there are over four million live trees, plants and flowers, the Tree of Life is not one of them. The 145-feet-tall tree was made from a refitted oil platform. Its design was inspired by the look of the baobab tree and has 8,000 branches that bare over 100,000 leaves made of kynar. And though the leaves are not living, they were created to look like the real thing. Five shades of green were used on the leaves and they blow in the wind, like actual foliage.

All around Discovery Island, you will notice animal themes inside every shop and restaurant. Take a look inside the Island Mercantile and see migratory animals depicted on the walls in the décor. Notice the four corners of the Discovery Trading Co. shop—each is adorned with animals from the northern, southern, eastern and western parts of the world. When you stop for lunch at Pizzafari, you’ll see brightly colored murals on the walls of each dining room that depict different animal themes—animals that carry their homes with them, nocturnal animals and animals that hang upside down! In addition to the murals, there are over 500 carved animals from Mexico hanging from the walls and ceilings inside this fun pizza and safari-inspired eatery. At the Flame Tree Barbecue quick-service counter, you’ll notice a theme of predator and prey—eagles eating snakes, eels eating crabs and more. (I’m not sure the murals are too appetizing, but the barbecue is really good!)

This attraction is located at the base of the Tree of Life. It was inspired by Disney/PIXAR’s A Bug’s Life, and then again, the attraction somewhat inspired the film. That’s because this 3D experience debuted at Animal Kingdom six months before the feature film hit theaters. At the time plans were being made for the attraction, not all the characters had been developed for the film yet, so Disney Imagineers called on entomologists to help develop the attraction, which consists of a live show and 3D imagery—both of which focus on the many survival techniques of different insects. The experience takes place in the Tree of Life Repertory Theatre, which seats over 400 Guests. You’re invited to come inside and take a look at the world from a bug’s perspective. After you experience the creative audio animatronics, 3D movie effects and immersive 4D surprises, you’ll have a better understanding about how very tough it is to be a bug!

3. Anyone hungry for barbecue?

Some of the best barbecue at Walt Disney World is served up in a little eatery inside Discovery Island called Flame Tree Barbecue. In addition to wine and beers, this counter-service restaurant serves barbecued ribs and chicken, pulled pork sandwiches, baked mac’n’cheese with pulled pork and watermelon salad. If there’s only one quick-service menu you sample at Animal Kingdom, let it be this one!

As with most places inside the Walt Disney World Resort, Discovery Island is home to several hidden Mickeys. We won’t give away the exacts here, but keep your eyes open inside the Pizzafari quick-service restaurant and at the Adventurers’ Outpost character greeting spot (look for the giant postcard)!

Meet Mickey and Minnie in their safari best at the Adventurers’ Outpost character greeting spot inside Discovery Island. PhotoPass Photographers are on hand to capture the moment as you meet Mickey and Minnie. You’ll get to see mementos and souvenirs from all of their exciting travels all over the world. FastPass+ times are available for this character encounter. Don’t miss it!