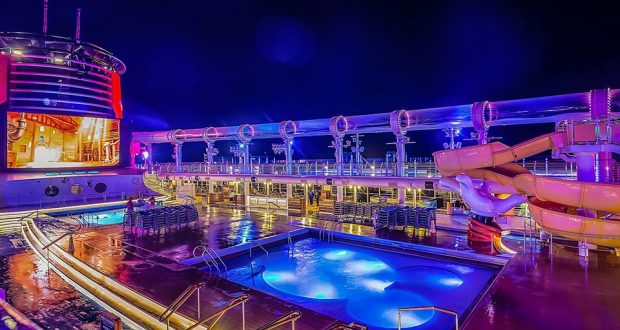 8 Disney Must-Dos Around the Globe

If you’ve never had the chance to visit multiple Disney theme parks, you might find yourself thinking that they’re all pretty much the same. That’s a common misconception we’ll dispel for you here today, because no matter which of Disney’s parks (or other experiences) you opt for, you’ll discover that they each offer unique experiences you won’t be able to find anywhere else. Here are 8 such examples that we highly recommend adding to your bucket list.

Nowhere else in the world can you truly live the experience of Disney·Pixar’s Cars animated film like you can in Cars Land in Disney’s California Adventure Park. You really feel like you’re walking through the town of Radiator Springs, down to the last detail. The flagship ride in this land, Radiator Springs Racers, takes you on an abbreviated journey through major events from the film, such as driving through Ornament Valley, tipping tractors with Mater, and the most fun part of all: the big, high-speed race at the end. What a rush!

Speaking of “around the globe”, there’s one place that offers a sense of worldwide travel without having to book all those plane tickets: Epcot’s World Showcase. Made up of eleven pavilions—each representing a different country, with dining and attractions to match—a single trip around the World Showcase Lagoon will leave you feeling like you’ve visited nearly a dozen unique lands. At least once in your life, you’ve simply got to go on a Disney Cruise. As hard as other cruise lines try, there’s simply no experience like cruising Disney-style. What other ships can you board where you can meet your favorite Disney characters on your way to the buffet? What other cruise line puts as much emphasis on family fun as Disney does? Yeah, exactly. As fun as the cruise is, disembarking at Disney’s private island, Castaway Cay, is an experience unto itself. It’s absolutely gorgeous and is only ever populated with fellow Disney cruisers, so it never gets overcrowded. The ultimate way to experience this paradise is by renting a bike and pedaling down the airstrip and across the winding paths that traverse the island.

What better place to visit the Parisian culinary world of Disney·Pixar’s Ratatouille film than…well, Disneyland Paris? On this 4-D ride you are shrunken to the size of Remy and his rat pals, who end up being chased around Auguste Gusteau’s famed (and suddenly enormous!) restaurant by the dimunitive and short-tempered Chef Skinner, enjoing the eatery’s sights, sounds and smells along the way. If you can’t make it to France to experience this ride, here’s the good news: A similar attraction is slated to open in Epcot’s France Pavilion in the World Showcase by 2021!

With the recent opening of Toy Story Land over in Hollywood Studios, Animal Kingdom’s Pandora – The World of Avatar is no longer quite the talk of the town, but if there’s one thing you can still count on, it’s a two-hour-plus standby queue for the Avatar Flight of Passage ride. We can hardly blame people for waiting so long because this is an immersive, one-of-a-kind experience, and arguably the best ride in all of Walt Disney World right now. After the “orientation” process, you are paired with one of the genetically engineered Na’vi “avatars”, with which you get to fly on the back of a banshee creature and soar over and through the fantastical Pandoran landscape. It’s not to be missed. 7. Journey to the Center of the Earth (Tokyo DisneySea)

Tokyo DisneySea is home to a slot car ride called “Journey to the Center of the Earth” that is quite reminiscent—on a technical level, anyway—of Epcot’s Test Track and California Adventure’s Radiator Springs Racers. Thematically, however, it’s a wholly unique journey. Rather than having anything to do with race cars, this ride takes you deep underground via steam-powered mine vehicles to explore the subterranean base of Captain Nemo. Along the way you’ll see strange creatures, colorful crystals, and even avoid one angry lava monster before escaping back to the surface world via an erupting volcano. How could you pass that up?

At first glance, you might look at Mystic Manor and think, “Is this just a clone of Haunted Mansion back in the States?” The answer is: nope! While you will find one or two minor influences from Haunted Mansion on this whimsical trackless ride, the experiences couldn’t be more different. In fact, Mystic Manor is one of the most impressively complex dark rides we’ve ever seen, making you feel like you’ve stepped into the world of some animated fantasy story.