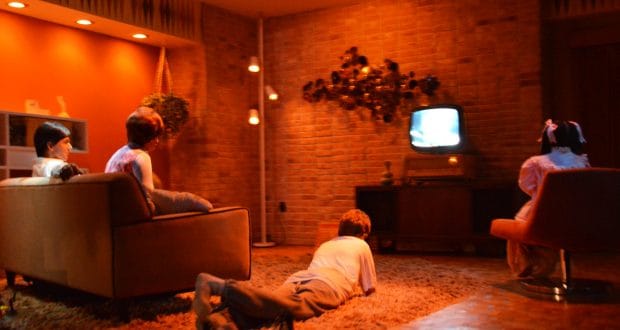 You’ve seen it before – every time you’ve visited EPCOT at the Walt Disney World Resort outside of Orlando, Florida. It stands as a beacon to all who come into the park. Perhaps you’ve visited the park solely for the tour of countries around the World Showcase. Maybe you’ve had Park Hopper passes, so you’ve only used your time at EPCOT for FastPasses on Soarin’, Test Track or the newly revamped Mission Space and then hopped on the monorail to head to Magic Kingdom.

But if you’ve only passed underneath Spaceship Earth en route to the Food and Wine Festival each year, but never stopped to take a look inside, or if it’s been a while since you took the journey aboard Spaceship Earth, it’s time you took another look inside this fascinating attraction. Here are eight reasons why.

8. The mural outside is pretty amazing.

As you come to the end of the queue for Spaceship Earth, you’ll notice a large mural on the wall just before you reach the ride’s loading area. It measures 24’ by 18’, and it took Italian artist Claudio Mozzoli two months to create it. In keeping with the theme of the attraction, the mural depicts different aspects of communication—the development of communication over time and communications over distances from Earth to many satellites. There is a spaceship in the mural, as well as an astronaut’s suit. NASA provided the research on the suit as well as the information on the spaceship and satellites that are depicted as part of the mural.

The attraction hosts Guests in omnimover “time machine” vehicles on a 14-minute journey through the growth and development of communication. The ride begins in the Stone Age with a woolly mammoth and takes riders all the way to the Information Age and beyond. Guests see how ancient peoples played roles in creating the alphabet, how they used language and how they shared information. Later in the journey, Guests see the depiction of a young man working in his garage on the creation of what will be called a “computer”—clearly a nod to Steve Jobs who played a part in the Disney story before his death.

Guests also see a huge mainframe computer, hear Neil Armstrong’s famous words about “one small step for man,” and even spiral to the top of the Spaceship Earth structure to see a beautiful view of planet Earth from afar.

6. Some pretty famous people have played roles in the attraction.

Not only is an audio animatronic Michelangelo depicted painting the Sistine Chapel in one section of the ride, but the attraction has had a few famous narrators. Walter Cronkite and Jeremy Irons both previously narrated the story of Spaceship Earth. The current narrator is Dame Judi Dench. And the storyline itself was influenced largely by one of Walt’s friends and famous science fiction writer Ray Bradbury, who penned the bestseller Fahrenheit 451.

If you look closely at many of the audio animatronics used inside the attraction, you may recognize some of them, especially if you’re a fan of the Hall of Presidents attraction at Magic Kingdom. That’s because many of the audio animatronics at Disney are repurposed when possible. You’ll notice that the Greek scholar in one scene is actually William Henry Harrison. A Roman soldier is Zachary Taylor, and the Roman Senator is Theodore Roosevelt. Two Islamic scholars are depicted in yet another scene, and they were once Presidents Franklin Pierce and John Tyler at the Hall of Presidents. Their Islamic leader is the repurposed William Howard Taft, and in the scene with monks copying and translating the Bible, you’ll notice that the monk writing on parchment is President John Adams from the Magic Kingdom attraction. During the Renaissance scene, the lute player is none other than President Dwight David Eisenhower, and the sculptor to your left in the same scene is President Ulysses S. Grant.

4. The musical score is one of the best at Walt Disney World.

The current musical score, titled “Spaceship Earth,” was conducted by 10-time Emmy winner Bruce Boughton. For the attraction’s impressive musical backdrop, Boughton conducted a 63-piece orchestra and 24-voice choir. The music in each scene depicted as part of the attraction features the style of music and instruments from that time period, transitioning flawlessly from one scene to another, which takes genius in composing. It’s a beautiful score that captures the mood of the ride from scene to scene.

3. It has had some very well-known sponsors.

When the attraction first opened in 1982, its sponsor was Bell Systems. Two years later in 1984, AT&T signed a sponsorship agreement with Disney for the attraction and remained its sponsor until 2004. In 2005, German company Siemens AG became the sponsor for Spaceship Earth and remains its current sponsor although as of 2017, it has been reported that Siemens will not be renewing their contract. We will have to wait and see what will take place with Spaceship Earth if/when Siemens drops their sponsorship.

2. You can send yourself a postcard from the future.

Toward the end of your ride, you and the person with whom you’re sitting will be able to answer several questions about your interests, and your responses will be put together to create a story about your “future.” At the very beginning of the ride, a camera takes your picture, and it’s during your “story of the future” that you’ll get to see your picture as it is superimposed on characters in the story template. It’s interesting, a little comical and pleasantly interactive. After you disembark from the ride, you’ll be able to access computers from which you can send virtual postcards from the attraction to yourself via e-mail, complete with your superimposed pictures!

As you disembark from the ride, you are introduced to yet another attraction within the Spaceship Earth attraction. Before you exit the pavilion, you’ll be invited to explore Project Tomorrow, an interactive area of displays, games and information about the future of communications. It’s the perfect educational play area for all ages, and it further expands the attraction’s interesting exhibition of the progression of communication and how it is used in different ways.

The next time you visit EPCOT, don’t run past the gate too quickly. Take a journey back in time on Spaceship Earth, and don’t leave Future World without visiting Project Tomorrow as well.