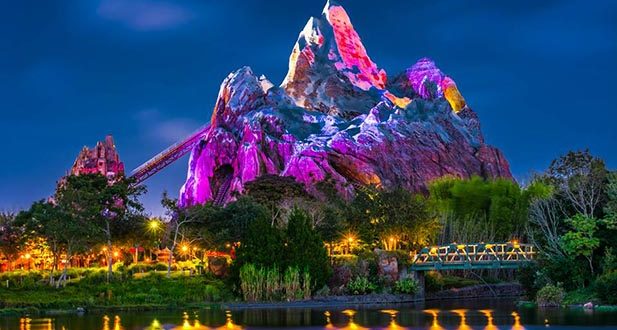 Some people are the world-traveler type. Others are the Disney World-traveler type. As a Disney fan, I happen to prefer the latter of the two. Why fly all over the world, enduring lay-overs, lost luggage and jet lag, when I can visit my one happy place and experience all the magic the world has to offer—in that one place?

I’ve not yet visited Asia. And I’ve never seen the Himalayan Mountains in person. But I have visited Disney’s Animal Kingdom Park, and thanks to the magic of Disney Imagineering, I almost believe I have stepped onto Asian soil, that I am actually in Nepal, at the foothills of the Himalayas. In fact, at Animal Kingdom, I can set my sights on Mount Everest, and just inside the park, I can take a train up into the Himalayas toward the base camp of Mount Everest.

Behold, Expedition Everest: Legend of the Forbidden Mountain—one of the most popular Disney World attractions of all time. It opened to the public on April 7, 2006, and to this day, it’s still important to secure a FastPass+ time to ensure that you and your family get to enjoy this awesome experience. What’s so great about it? Frankly, too many things to mention, but here are 8 really cool things about this dynamic coaster that will have you planning your very own expedition on your next Disney trip.

8. A lot of research went into it.

Imagineers never do anything halfway. Before an attraction is ever built—especially one of this magnitude—it is researched, planned out, modeled and tested. Part of the research that went into this attraction was completed on trips to Asia—specifically to Nepal to make observations of the Himalayan Mountains and of the surrounding villages. Photographs were also taken so that Imagineers could create, plan and build a more realistic-looking mountain and village surrounding the mountain. In fact, over 6 years went into the planning, researching, designing and building of this attraction.

Legend has it that a fierce monster guards the Forbidden Mountain. Despite the folklore, the Royal Anandapur Tea Company began shipping tea by rail years and years ago via the Forbidden Mountain pass. Over time, several accidents occurred, and village people believed the accidents were the work of the Yeti monster—known to some as the Abominable Snowman. Because of this, the railroad closed.

In present day, however, the railway has reopened, and tours of the Forbidden Mountain are offered by a local group of entrepreneurs. Whether there’s any truth to the legend of the Yeti and whether he’s still angered by those who traverse the mountain remains to be seen. Only those brave enough to board the trains will ever know.

6. Props play a huge role in the attraction.

Imagineers purchased over 8,000 props to be used in the Expedition Everest attraction. Most were bought in Nepal. They include artifacts such as dance costumes, antique Chinese ceramics and Yeti dolls, all of which lend themselves to the realism and believability of the attraction.

5. The Yeti is pretty impressive.

Inside the caves of the Forbidden Mountain, the Yeti stands guard. Apparently, the legend is true—as ride-goers will tell you—because they’ve seen him—the Yeti. But of course, since he lives inside a mountain situated inside a Disney park, there’s a little more to him than mere folklore. He’s quite the impressive audio-animatronic!

The skin of the Yeti measures just over 1,000 square feet, and it is held in place by 1,000 snaps and 250 zippers. There are 19 actuators that control the movements he makes, and he can move five feet vertically and two feet horizontally, thanks to a “boom lifter” that goes into the Yeti’s back and pushes him in and out. He’s massive at 23.5 feet tall!

What better way to get people excited about a new ride at Disney World? Yes, Disney staged a publicity stunt high above Times Square in New York City on February 15, 2006. The event was called “Everest in the City,” and during the event, large billboards that looked like the Himalayan mountains were draped over the sides of several buildings and served as backdrops to the acrobatics and gravity-defying feats exhibited by performers from the dance company, “Project Bandaloop.”

3. It holds a Guinness World Record.

Yes, in 2011, Expedition Everest was listed in the Guinness Book of World Records as the most expensive roller coaster ever built, at a cost of over $100 million!

2. Beware the broken track and a backward route!

At one point in the ride, the train barrels toward what looks like the end of the track. Upon reaching the end, riders realize the track has ended, but not by design. It appears to have been ripped apart by something with greater than human strength. But instead of the train racing off the cliff, it falls backward down the track. As if it weren’t enough to be watching out for the Yeti while facing forward, now travelers race toward an unknown destination—facing backward on the train!

It can be seen from outside the attraction, and it’s impressive! Half-way through the ride lies another chain lift, and that can only mean one thing—a drop, and on Expedition Everest, that drop is 80 feet high! No need to worry though—it happens very quickly!

If you’re up for the grueling challenge, and you aren’t afraid of the legend of the Yeti, Expedition Everest could easily become your new favorite attraction!