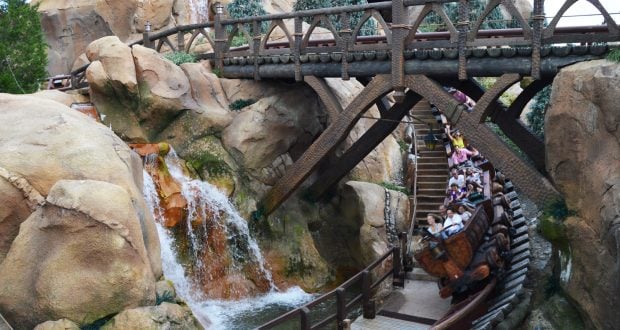 Seven Dwarfs Mine Train uses a new kind of ride vehicle: each car is free swinging. That makes for a rolliking ride through the diamond mountain. As your mine cart careens around curves, you’ll feel your ride vehicle swinging side to side. And it’s not just around the curves, you can get your cart swinging by shifting your weight in your seat.

Disney attractions are famous for their lifelike audio-animatronics (or AA figures). Imagineers created figures incredibly close to the original characters for this attraction. The figures are a combination of traditional audio-animatronics and digital projections. Technically speaking, this kind of projection was used already, over at Buzz Lightyear’s Space Ranger Spin, as Buzz’s face is a digital projection. But the technology has improved so much, that the dwarfs’ faces are a huge step up from Buzz’s face! Imagineers clearly like this style, because they used it again in the new Frozen Ever After attraction over in Epcot!

Not every AA figure in the attraction is brand new, some have been around since the days of Snow White’s Scary Adventures. At the end of the attraction, your mine cart pauses outside the Dwarfs’ cottage, and Snow White can be seen dancing with the dwarfs, while the Evil Queen, disguised as a hag, approaches the door. These audio-animatronics are actually repurposed from the previous Snow White attraction. And if you pay very close attention, you’ll notice that the scale is different from the old audio-animatronics to the new ones. In addition, the two vultures near the beginning of the attraction, are also repurposed from the old Snow White’s Scary Adventures.

4. Fire on the Mountain

On November 1, 2014, embers from the Wishes fireworks set a small portion of the mountain on fire. Reedy Creek Fire Department arrived within minutes and put the flames out. The fire was contained to fake foliage, did not spread to any ride buildings, and no one was hurt. The ride reopened about two hours after the incident. However, the fire did make quite a splash on social media.

Way back when Imagineers were planning the New Fantasyland expansion, an attraction based on Hans Christian Andersen’s The Snow Queen was bounced around, before the team ultimately landed on an updated Snow White attractions. Imagineers and Disney execs wanted to utilize Disney intellectual property. Of course, this was all before Disney released the blockbuster hit based on that very same story, maybe you’ve heard of it.

Disney parks are famous for hyper detailed dark rides. Seven Dwarfs Mine Train features a gorgeously themed dark ride sequence through the diamond mine. The dark ride is sandwiched between two stretches of family friendly roller coaster. It’s a great introduction for rollercoasters for little ones, while also living up to the Disney reputation for highly themed dark rides.

On-ride cameras capture both video and photos for guests who purchase the Memory Maker package. Guests get both video and pictures of their minecart hurtling around a bend. Plus, guests get a short video of the dark ride portion of the attraction. Seven Dwarfs Mine Train is one of only two attractions that feature video as part of Memory Maker, the other is Twilight Zone Tower of Terror over at Disney’s Hollywood Studios. Unlike the other attractions with on-ride cameras, there are no monitors where guests can view their pictures after the attractions. If you purchased Memory Maker, you’ll have to wait until the pictures and videos are uploaded to your account. Luckily, the pictures are usually added very quickly, and can be accessed on the go via the My Disney Experience app.