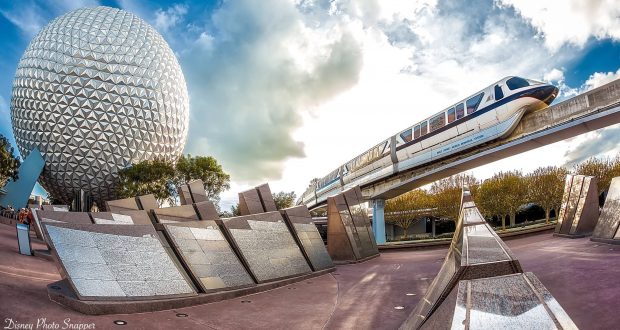 Epcot was the second Walt Disney World theme park to open. It has been thrilling guests since October 1, 1982. Epcot stands for Experimental Prototype Community Of Tomorrow, and it is not close to the working city that Walt Disney envisioned. Still, there is plenty that Walt most likely would have loved about the park. It is a great place to learn as you have a good time. Here are seven facts and secrets that you may not know about Epcot.

Sudden storms are common in Florida, especially during the summer. These storms will spring up with little notice, and if you’re lucky the storm will pass just as quickly. If you’re looking for a place to find shelter, try under Spaceship Earth. You’ll still be outside, but unless the rain is blowing you’ll stay dry. That is because Spaceship Earth was designed to drain rain water in a unique way. There are two gutter systems that will catch the water and drain it into World Showcase Lagoon. If there is lightning in the area you should wait out the storm indoors instead.

If you’ve been to Epcot, chances are that you’ve walked on the bridge between African Outpost and China. Did you know that it’s a working drawbridge? Each afternoon it goes up so that the barges for IllumiNations can go through. It will stop foot traffic for a few minutes, but it’s interesting to watch. Ask a nearby Cast Member what time the drawbridge will go up when you’re visiting so that you won’t miss it.

There is a nice freebie at Epcot that is easy to walk by if you don’t know that it’s there. Club Cool features Coke products from around the world, and it won’t cost you anything to try them. Small cups are provided and you can sample all you want, but you can’t take any outside with you. Club Cool isn’t quite a secret, but many don’t realize that they can quench their thirst there for free. If you haven’t been, make sure you try Beverly.

World Showcase is huge. Eleven countries are represented, plus there is an area known as Outpost (or African Outpost). Initially there were nine countries. Morocco was added to World Showcase in 1984 and Norway joined in 1988. But is World Showcase done? There is enough room for up to eight more countries. Some of the nations that have been mentioned as a possibility to join are Israel, Spain, and Brazil. While there have been plenty of rumors about additions to World Showcase, nothing has officially been announced, and it doesn’t seem like there is much of a chance of any country joining the current 11 anytime soon.

The Fountain of Nations is pretty to look at and fun to watch as the water dances to the music. But it is much more than that. The water shoots approximately 150 feet into the air! The fountain holds 115,000 gallons of water, and over 30,000 gallons are pumped in a minute. If you think that Epcot is wasting a lot of water, don’t worry. It’s an enclosed system, so the water is reused for the next show.

The Seas is more than a place where you can see Nemo and get out of the heat for a little while. The aquarium has a name; Caribbean Coral Reef. It is the largest saltwater tank on the planet. There are over 60 species in its waters, and 4,000 creatures call it home. The 5.7 million gallons of water are filtered in under three hours. There are fish feedings twice a day, and you could see a diver. If you’d like to know more about Caribbean Coral Reef and its sea creatures, sign up for a tour. There are several to choose from.

One of the ideas behind World Showcase was to encourage guests to visit the countries represented. Nowhere is this more prevalent than in the Morocco Pavilion. Everything is as authentic as possible, the King of Morocco himself was involved with the planning. Each year Morocco sends workers to touch everything up and to keep things up to par. One interesting secret that most haven’t heard, Tower of Terror can be seen from some parts of the Morocco Pavilion. The colors of the buildings and of the popular thrill ride are similar, so that they blend together. Most people do not even notice Tower of Terror because it mixes right in with the Moroccan buildings.

2016-08-15
PaulaK
Previous: Special Halloween Event Coming for DVC Members
Next: Details on Pandora for Walt Disney World Will Be Released at D23