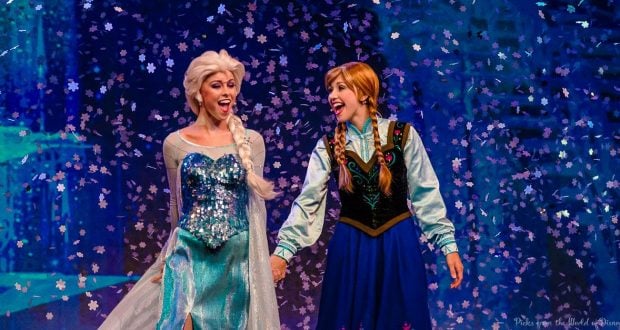 Entertainment is the name of the game for Walt Disney World and Disney delivers world class attractions, shows and experiences. My family has always been a very ride oriented family, rarely stopping for a moment to take in a live show. It wasn’t until I was in college and started taking some solo trips to Disney that I discovered the magic of live Disney shows. Shows may not produce the adrenaline pump of thrill rides, but they more than make up for it in quality, fun and “feels”. Here is my list of shows that I just know you are going to love!

6. For the First Time in Forever: A Frozen Sing-Along Celebration @ Disney’s Hollywood Studios

Frozen haters beware…this show is just about as adorable as it can possibly get and just as popular! This is one of the only shows where singing on the top of your lungs is absolutely welcome and expected, which is super fun for those of us that have the musical theater bug. Another reason to love this show is that it is really adorable with two cutesy characters leading you in good hearted laughs as they retell the story of Frozen…and I promise that the feels are totally there. You also get to see Anna, Kristof and Elsa in this show, which is all the rage right now. But, really, the number one reason I love this show is because the children absolutely LOVE it. I have never seen so many young girls look like they are going to go out of their mind with happy! It is a must see!

5. Beauty and the Beast- Live on Stage @ Disney’s Hollywood Studios

This Broadway style spectacular will have you singing along with your favorites. This show made its premiere on November 22, 1991 (the same day as the release of the movie) and gives 1500 guests a chance to sing along to favorites like “Beauty and the Beast” and “Be Our Guest” as you watch the ‘ tale as old as time’ unfold right before your eyes. With original movie voice overs of Angela Lansbury, Robby Benson and Jerry Orbach, you will feel like you are part of movie magic.

With its brand new theater created just for this show, I don’t think Festival of the Lion King is going anywhere anytime soon. You’ll marvel as the sounds of the jungle come to life as 4 singers lead you in a tribal style celebration. Timon joins in on the fun and leads “Hakuna Matata” while you watch the tumble monkeys (acrobats) show off their talent on center stage. Beautiful choreography for an aerial bird ballet is performed to “Can You Feel the Love Tonight” and a fire performer is showcased for “Be Prepared.” You will love this tribute to the Lion King!

There is a reason that Hoop-Dee-Doo is the longest, continuously running musicals in American theater history! With over 35,000 performances for over 10 million guests under its belt, the show opened in 1974 and is still selling out performances! This is a dinner show and along with your show ticket, you are served good old down home country cooking with beer and wine included. Six vaudeville performers will have you laughing and joining in on all the fun! With songs like “Oh, Suzanna”, “She’ll be Coming Around the Mountain” and “Let Me Call You Sweetheart.” you’ll have your fill of fun and tasty food.

I can’t see this show without crying my eyes out, but that’s in a super good way. With the relationship between Marlin and Nemo as the highlight of this show, 14 original songs and fun choreography will have you dancing in your seats! This 40 minute Broadway style show will have you in awe with incredibly creative ways to use puppetry to get the effect that you are in the big, blue world. Dory is simply adorable and Marlin will leave you heartbroken and then hopeful. Highlights include Bruce and Friends and Crush and his turtle family, including the adorable Squirt. Do not miss this show!

If you haven’t seen this exciting nighttime spectacular, my only question is, “WHY?” You will cheer for Sorcerer Mickey as he faces villains like the Evil Queen, Ursula, Cruella de Vil, Scar and Maleficent. Character appearances from Beauty and the Beast, Sleeping Beauty, Peter Pan, The Little Mermaid, Cinderella, Aladdin and The Lion King are also part of the fun. With pyrotechnics, laser light and one million gallons of dancing water, Fantasmic! Is a show you cannot miss at Disney World!