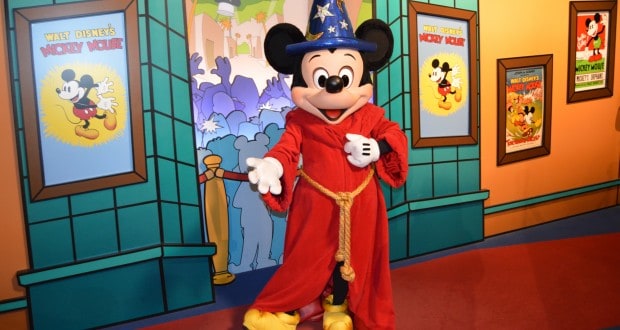 With all the changes going on, Disney’s Hollywood Studios now has a reputation with many for being a “half day park”. Other people think that it’s not worth it to stop by, and say that they will wait until Star Wars Land and Toy Story Land are open. If you only spend a couple of hours at the park, or if you skip it all together, you’re missing out. There is still plenty to see and do, even with all the closures. Here are five reasons to still love Disney’s Hollywood Studios, even during all the changes.

There are some fantastic meet and greet character opportunities at Disney’s Hollywood Studios. This is where you can find Sorcerer Mickey, he now hangs out in the back of the park. Other classic characters can be found near the front. You can meet some of your Pixar favorites such as Mike and Sully, or Buzz and Woody. Green Army Men are often on patrol near Toy Story Midway Mania!, waiting for a picture. Your little ones will love meeting some of their Disney Junior favorites. You can also find Phineas and Ferb, and Lightning McQueen and Mater. If you’re there at the right time of the year you might find some Star Wars characters or some classic villains. If you love character pictures, you’ll want to make Disney’s Hollywood Studios part of your next vacation.

There are some amazing shows at Disney’s Hollywood Studios that your whole family will love. Princess fans won’t want to miss For the First Time in Forever: A Frozen Sing-Along Celebration, Beauty and the Beast-Live on Stage, and Voyage of The Little Mermaid. Preschoolers will sing and dance along with Disney Junior – Live on Stage!. While it’s not a live show, your whole family will laugh at the antics of Kermit and the gang in Muppet*Vision 3D. For the best way to end your evening, grab your seats for Fantasmic!. The show will make you glad that you decided not to leave the park early.

3. Head Inside the Movies

One fun aspect of Disney’s Hollywood Studios is the fact that you can feel like you are stepping into the movies. The Great Movie Ride will take you into scenes from several classics; with some surprises along the way. On Star Tours – The Adventures Continue, you’ll ride into two different scenes from the Star Wars universe. Make sure you ride more than once, since there are over 50 possible ride combinations. On Toy Story Midway Mania!, characters from the films will help you play carnival style games. Two of the best places to head inside the movies are also live shows. Both Indiana Jones Epic Stunt Spectacular! and Lights, Motors, Action! Extreme Stunt Show will thrill you with their dangerous stunts, then they’ll take you behind the scenes to show you some movie making magic. If you love movies, Disney’s Hollywood Studios is still the place for you.

Even with all of the talk about changes, there are two rides that have pretty secure futures at Disney’s Hollywood Studios. They also happen to offer two of the biggest thrills at Walt Disney World. Rock ‘n’ Roller Coaster Starring Aerosmith takes off so fast that your mind won’t have a chance to catch up. You’ll go through loops and a corkscrew at 60 miles per hour, and it’s all in the dark. The Twilight Zone Tower of Terror is arguably the best drop ride on the planet. You’ll drop 13 stories over and over again in a random sequence. Just when you think that you’re headed back up, it will drop again. The ride’s backstory adds to the thrill. Rock ‘n’ Roller Coaster and Tower of Terror are two of the best reasons to visit Disney’s Hollywood Studios on your next vacation. They can’t be missed.

If you want a meal in a fun environment that you will be talking about for years, you have to make Disney’s Hollywood Studios a priority on your vacation. Sci-Fi Dine-In Theater Restaurant is unlike anyplace else that you’ve ever dined at before. Mom and Dad (or maybe Grandma and Grandpa) remember the days when drive in theaters were everywhere. One has been recreated at Disney’s Hollywood Studios. Even though it is indoors, you’ll feel like you’re eating outside in your car. The movie trailers add to the fun. For another restaurant that will take you back in time, try 50’s Prime Time Cafe. You’ll eat in the family kitchen while watching a black and white TV, and your server will be a long lost member of your family. If you’d like a meal that is a bit more upscale, make a reservation at The Hollywood Brown Derby. It’s a faithful recreation of the classic California restaurant, and it offers fine dining within a theme park. There are other fun places to eat as well, including a delicious Italian option, a character meal with the youngest members of your family in mind, and a peek inside the pizza restaurant from Toy Story. There is a lot to love when it comes to dining at Disney’s Hollywood Studios. You don’t want to miss out.