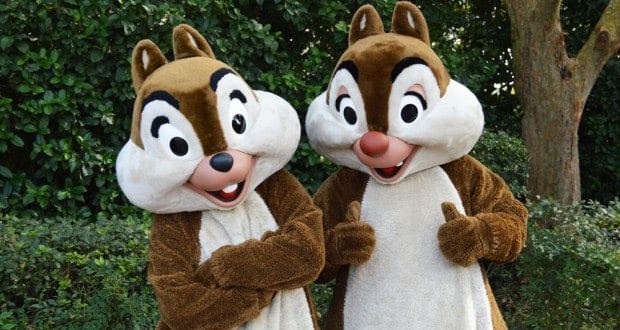 5 Of The Most Popular Characters At Walt Disney World

Walt Disney World is full of rides, shows, restaurants, attractions, activities and more. For many guests visiting Disney, their trip would not be complete without at least seeing, if not meeting some of the most famous characters in all of TV and film history. Who hasn’t dreamt of hugging their favorite Disney character and posing for pictures with memories that will last a lifetime? Walt Disney World has over 150 characters that are available to meet in different theme parks, restaurants and hotels at various times and occasions throughout the year. Below is the list we have compiled as 5 of the most popular Disney Characters at Walt Disney World:

We begin our list with two very close characters. These two cartoon antagonists seem to pop up just about everywhere. Though rarely will you find them separated, this comedic duo’s appearance varies slightly and their personalities differ even greater. Chip can be identified with a black nose and a single tooth. Chip tends to be more cunning and the brains of the operation. Dale differs by having a larger, red nose and two teeth. He tends to be a little more clumsy and dim witted. Chip & Dale are two of the few characters that can be found at all four Walt Disney World theme parks. In addition, you can join them at Ft. Wilderness each night around the campfire for a sing-a-long.

“To infinity and beyond!” This space ranger has always captured the heart of my oldest son. Known for his bravery and courage, Buzz Lightyear’s name was inspired by the astronaut Buzz Aldrin, the second man to walk on the moon. Buzz Lightyear has been voted #1 of the greatest Pixar characters of all time and his action figure has even made it’s way into space on the space shuttle Discovery with the astronauts in 2008. Buzz Lightyear can be found in Tomorrowland inside the Magic Kingdom and along with his friend Woody at Hollywood Studios. He even stars in his very own Magic Kingdom attraction, Buzz Lightyear’s Space Ranger Spin. Arguably one of the most elegant characters to be found at Walt Disney World, Cinderella is one of the most popular and classic Disney princesses. Described as an independent, yet caring woman, Cinderella was Disney’s second princess ever. A number of significant landmarks are named in honor of Cinderella, most notably, Cinderella Castle at the Magic Kingdom. And, the next time you find yourself boarding the Prince Charming Regal Carousel, look for the horse with a gold ribbon tied to it’s tail. That is Cinderella’s horse! Cinderella can be found alongside Rapunzel inside Princess Fairytale Hall for a meet and greet.

As the highest grossing animated film of all time, the hit movie, Frozen, took the world by storm in 2013. At the center of this top rated film is Elsa, Queen of Arendelle. Born with the powers to throw ice and conjure up cold temperatures and extreme blizzards, Elsa’s calm and collected elegance draws in fans of all ages. Wait times to meet Elsa and her sister Anna went north of four hours in their first few months of appearing making them one of Walt Disney World’s most popular characters. These sisters can be visited at the Royal Sommerhus with much better waits times now a days at the Norway Pavilion at Epcot. They can also be viewed from the Festival of Fantasy Parade at Magic Kingdom and be seen at the Frozen sing-a-long at Disney’s Hollywood Studios. Walt Disney was famously quoted as saying “I only hope that we don’t lose sight of one thing – that it was all started by a mouse.” Before Mickey Mouse, Walt originally created Oswald the Rabbit. Oswald never enjoyed the fame that now belongs to Mickey Mouse. Mickey Mouse is probably Walt Disney World’s most iconic character and the official mascot of the Disney company worldwide. Sometimes seen with his good friend Minnie, few people don’t know who Mickey Mouse is. Mickey can be met at all four Walt Disney World parks. He can be found at the Epcot character spot along with his friends Goofy and Minnie. You can find Sorcerer Mickey at Hollywood Studios. Both Mickey and Minnie can be met together at the Adventurers Outpost at Animal Kingdom. Mickey’s Town Square Theater just steps inside the Magic Kingdom reveals a Mickey Mouse who is a magician. Mickey Mouse easily takes the #1 spot as the most popular character at Walt Disney World!

Which characters do you think are the most popular? Be sure to share your thoughts in the comments below!