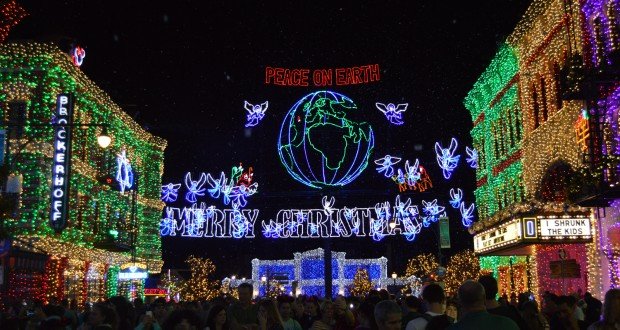 With all of the incredible announcements made at the D23 Expo this year, it may be easy to overlook everything that we are losing to gain the new improvements being made to Walt Disney World parks. Hollywood Studios is about to get a facelift so massive the park itself will never look the same again. In order to make room for the incredible Toy Story Land and the out-of-this-world Star Wars Land, a few of the signature staples of Hollywood Studios will sadly have to go the way of Mr Toad’s Wild Ride. Some of these upcoming closures are already confirmed; some are rumours and assumptions based on what we know. One way or another, I would take the opportunity to get to these attractions soon, before they are gone for good.

This one has been confirmed. This Christmas season will be the last time you will get to witness one of the most stunning shows/attractions the parks have ever seen. Millions of lights dance the night away to Christmas music, as it snows on the Streets of America. I always make sure I bring along my “Glow with the Show” Mickey ears, as its lights dance away in time with the lights on the buildings, enhancing the experience. We’ve always enjoyed this show most by taking our time walking around, checking for the countless Hidden Mickeys and enjoying a hot chocolate while snow falls on us. This year for its swan song, dining experiences will be added to the attraction; you’ll be able to reserve a seat right in the middle of the action. So if you are able to make it this Christmas season, check out the Merry and Bright Dessert Party. It is an additional ticket, but it looks like it’s going to be well worth it.

We love this show.   It really doesn’t matter how many times you see it; it’s always enjoyable. The huge set pieces and props utilized in this attraction take up an incredible amount of space in the corner of Hollywood Studios. It has been rumoured for some time that the show would be making its way out, but so far it has held off destruction. Considering the huge areas they are going to need for their new lands, though, it may not hold out much longer. On a related note, here’s a hint for anyone wanting to be part of the show. When they ask who wants to be an extra, stand up and wave your arms as crazily as you can. Doesn’t matter where you are (though if you are in the center sections you have a better chance of getting noticed). Being part of the show really is amazing.

This really hasn’t been announced but if we think about the announcement for The Osborne Spectacle, this one seems like it will be announced very soon. This area has never really lived up to what it was supposed to be, but has always been a great place for promotions for upcoming films. The Cinderella coach that was in front of the theatre was a great photo op, as was the addition of Mr. Gold’s Shop front with abundant props from the hit show Once Upon A Time. And who hasn’t taken their photo down the side street with the Singing in the Rain umbrella? All of these were wonderful reasons to have a relaxing wander through the Streets of America. It does sound like this area has already been earmarked for one of the new lands, so enjoy these opportunities while you can.

I am going out on a limb on this one, and I really hope I’m wrong. As a child, The Muppet Show and the Muppet characters were a staple in my home. Jim Henson was one of my heroes. Though the show itself could definitely use an update, the possibility of losing the Muppet Theatre is almost more than I can bear. The store that used to be largely made up of Muppet merchandise keeps getting usurped by other items, and now that the art from the Magic of Disney Animation store has moved in, there are only a few Muppet items there. This seems once again to point to an abandonment of the ride. If you have a trip coming up, I’d take at least one opportunity to watch the show in the Muppet Theatre. Keep your head on a swivel as your favorite Muppet characters show up in the box seats, in the curtained-off area to the sides of the stage, and in the orchestra pit. Near the end of the show, turn around and check out one more Muppet character behind you in the projection booth.

Hopefully some of these cherished attractions will be moved or reimagined in another area of the parks. Or perhaps rumours are false on at least one of these closures, and we’ll get to enjoy them for years to come. What is for certain is that the new lands are going to transform Hollywood Studios, so make sure you take as much in as you can for now; in a few years it won’t even be recognizable.

2015-09-22
Jason Dick
Previous: 5 Things You Will Love About Akershus Royal Banquet Hall
Next: 6 Reasons Why Disney’s Hollywood Studios Is Still Worth a Visit