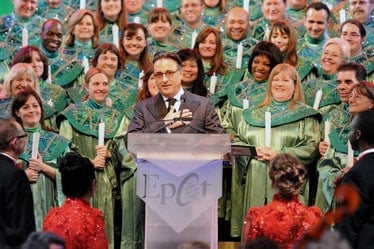 Details are starting to emerge about the 2013 Candlelight Processional. A yearly event that takes place at the American Gardens Theater at Epcot, the Christmas story is retold by a celebrity narrator. A mass choir and a 50 piece orchestra add to the event. The Candlelight Processional is included in park admission. Lines grow quickly so it is a good idea to arrive early, or make a reservation at one of the restaurants listed below.

Celebrities are subject to change or cancellation without notice. According to Disney, the celebrity narrator list currently is as follows:

If you’d like to experience the Candlelight Processional without waiting as long in line, consider booking a Candlelight Dinner Package. Special reservations are currently being accepted at select Epcot restaurants. At your meal you’ll receive a voucher that will allow you and your party access to the VIP seating area. Reservations must be made at https://disneyworld.disney.go.com/dining/epcot/candlelight-dinner-packages, you cannot use the normal reservations link if you want to receive a voucher. The restaurants participating in the 2013 Candlelight Dinner Package program are: