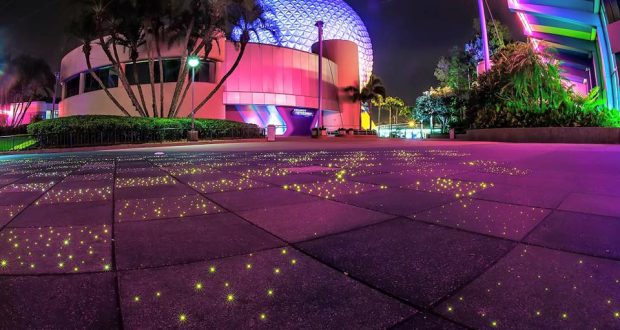 Epcot was the second park to open at Walt Disney World on October 1, 1982. Epcot consists of two worlds, Future World and the World Showcase. Here are 20 tips and secrets to help you tackle this incredible park.

Arrive at least 30 minutes prior to rope drop and you’ll be able to pack a lot more into your day at Epcot. You’ll find shorter lines and a less crowded park first thing in the morning.

Epcot is a huge park. In fact it’s twice the size of Magic Kingdom. Keep this in mind when planning your day at Epcot. Wear comfortable shoes because you’ll do a lot of walking. Try to avoid walking back and forth between Future World and the World Showcase too much. This will save you time and energy.

Visit Epcot in the spring during the Flower & Garden Festival, which features beautiful Disney character topiaries throughout the park. It’s one of the most beautiful times to visit Epcot.

Don’t waste time in line waiting for your quick service meal at Epcot.  You can order your meal on the My Disney Experience app for the Electric Umbrella, Liberty Inn and Sunshine Seasons.

Test Track has a single rider line that can minimize your time waiting in line. This is a great option if you don’t have a FastPass+ and don’t mind being separated from your party for the duration of the ride.

Located between the France and UK pavilions is a second entrance into Epcot. It’s called the International Gateway and it’s a convenient entrance for those staying at resorts in the Epcot area, or for those wanting to explore the area.

If you love the attraction Living with the Land then you need to go on the one hour walking tour of the greenhouses and the fish farm in the attraction. Behind the Seeds is an extra charge but affordable, and if you enjoy the edutainment side of Epcot, this tour is for you.

There is a ton of delicious food to be had at Epcot. The secret is to share your snacks and meals as you travel around the World Showcase. This way you won’t fill up so fast and you can try even more treats!

11. Frozen Ever After Dessert Party

The Frozen Ever After Dessert Party offers Frozen themed desserts, beverages, the best view of Illuminations, and the event ends with a ride on Frozen Ever After. This party is a ticketed event and an extra cost.

Nemo & Friends isn’t the only great attraction at The Seas pavilion. There are beautiful aquariums and sea life to see here. There’s even a restaurant here, The Coral Reef, which has a beautiful view of the giant aquarium.

Akershus and the Garden Grill offer character dining experiences that start taking reservations for breakfast at 8am. If you’re able to snag a reservation at 8am you’ll be in the park a full hour before the park opens at 9am.

There are two incredible bakeries in the World Showcase. Plan to stop at both. Karamell- Kuche in Germany is worth stopping by just for the smell alone. The bakery in France, Les Halles Boulangerie-Patisserie has some of the most delectable pastries and desserts at Disney. They have both sweet and savory treats and snacks so there’s something here for everyone.

Characters have been known to show up unannounced between the Canada and UK pavilions in the afternoons, around 2pm-3pm. This is not an official character meet and greet and it doesn’t always happen, but it’s worth checking this spot out in case characters appear. Sometimes there are rare characters, and other times there are classic characters.

At night keep your eyes on the pavement in Future World. There are a few sections of pavement that light up with fiber optics, and they’re mesmerizing! Some twinkle and others swirl.

Illuminations is no secret, but our tip is to make sure you see it at least once. It’s a truly magnificent firework show with an epic soundtrack. Find a spot at least 30 minutes before the fireworks are set to start if you want a good view.

Spaceship Earth typically has a longer line earlier in the day. It is the first attraction people see when they enter the park. Wait until later in the day when the line up dies down to walk right onto this classic attraction.

One of the most popular times of the year to visit Epcot is during the Food & Wine Festival during the fall. There are demonstrations, celebrity chefs, and best of all the marketplace food booths. This is arguably one of the best times to visit Epcot, but it’s a good idea to visit on a weekday as the weekends can be extremely busy.

Future World opens at 9am, and the World Showcase opens at 11am, however there are a exceptions to that. Norway and France are open at 9am. The quick service location is open for breakfast in France, and Frozen Ever After is open for guests at park opening.

After Illuminations, you still have some time to wander the park a little. Restaurants take reservations until park closing, and Mouse Gear will stay open for a bit too. So take your time as you exit Epcot. Take in the World Showcase, and get a photo in front of Spaceship Earth as you leave.