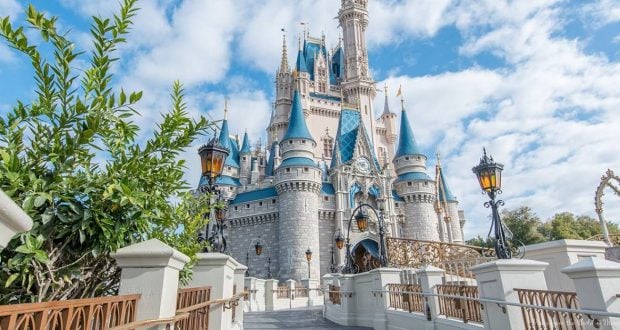 15 Things You May Not Know About The Magic Kingdom

Visiting Walt Disney World’s Magic Kingdom probably ranks as the most enchanting vacation that children experience today. From the moment they lay eyes upon Cinderella Castle to the time they meet Mickey, children soak in the theme park magic, creating memories that captivate their imagination for years to come. But the magic doesn’t occur accidentally, nor does it spring to life by sprinkling pixie dust. It requires amazing skill, brilliant engineering, and a strong commitment to the details that draw you into Disney’s stories.

We don’t recommend this list for children; nobody wants to spoil their wonder with mundane explanations. If you’re curious, however, then keep reading to discover 15 things that you may not know about the Magic Kingdom.

The highest priority for the Magic Kingdom has always been safety. Since Central Florida attracts a lot of rainstorms, Disney used slip-resistant materials on walkways to protect guests from nasty falls.

Lightning accompanies the many storms in Central Florida, so Imagineers created structures that double as lightning rods. Cinderella Castle is also a lightning rod, and though the Enchanted Tiki Room looks like a tropical building with a thatched roof, it’s really made out of aluminum strips. There are many more disguised lightning rods; just glance at the rooftops to see if you can locate them.

It’s hard to believe, but a single driver operates each parade float. To maintain safety, many cast members serve as chaperones, ready to shut down a float by pressing an emergency button if a problem arises.

The original Liberty Tree was an elm in Boston that American colonists used for rallying against the British. In honor of Walt’s patriotism, Imagineers moved an old oak to Liberty Square from another location on the property to represent the Liberty Tree. While being relocated, the trunk split, so in order to save the tree, landscapers grafted a younger oak to it. The doubled tree remains healthy to this day.

Each train is named for an important person in Walt’s life. The Lilly Belle is named for his wife, Lillian, the Roger E. Broggie for an Imagineer, the Roy O. Disney for his brother, and we all know who the Walt Disney is named after. Disney purchased them from The United Railways of Yucatan (Mexico) in 1969 and reworked them for the Magic Kingdom.

Walt envisioned the Magic Kingdom as a real life movie experience for park guests. Everyone can see the onstage portion that, but the backstage is hidden from guests. Keeping with the theme of each movie or section of the park, Disney designed gradual transitions. Therefore, your imagination isn’t shocked by instantly moving from Main Street, U.S.A. to Adventureland or from seeing Frontierland cast members wandering around Tomorrowland.

American flags flap in the wind all over Main Street, U.S.A., but the only official one appears in the circle at the front of the park, and it is lowered daily during a flag ceremony. All other flags contain an incorrect number of stars and/or stripes, because the U.S. Flag Code permits official flags to only be displayed outdoors from sunrise to sunset. Imagine lowering all those flags every day!

Second floor windows on Main Street, U.S.A. pay homage to those who impacted the world of Disney. In the movie of the Magic Kingdom, they are the credits that roll at both the beginning and the conclusion of the film. The names include executives, Imagineers, and family members. You can even find Walt Disney’s name over the back of the Plaza Ice Cream Parlor.

The Magic Kingdom’s audio tracks augment each attraction’s theme. For example, the Jungle Cruise broadcasts fictitious announcements that relate to the ride. Also, background music for each area of the park promotes its theme. The Imagineers even added barely detectable details, such as bird songs and singing and dancing lessons in Main Street, U.S.A.

Like real movie sets, Magic Kingdom uses forced perspective to create the illusions. For example, the second floors of Main Street, U.S.A. are just a bit shorter than the first floors, making buildings seem taller. Also, the buildings get progressively smaller as you approach Cinderella Castle to make the castle loom larger in your sight. Forced perspective tricks the brain into imagining a grander, larger Magic Kingdom.

This wonderful castle contains no bricks; it’s actually constructed from steel-based frames, reinforced concrete, and fiberglass. Also, the higher levels, along with their faux bricks, are proportionally smaller than lower ones—remember forced perspective—to give it an appearance of great height. In addition, the castle contains a secret room (Cinderella Castle Suite) designed to give Walt and his family a place to stay when they visited. It was finally finished in 2007 but cannot be booked; guests are only allowed as winners of contests or sweepstakes.

Bathrooms didn’t exist in colonial America, so you won’t find restrooms in Liberty Square. Even the restrooms in Columbia Harbor House are located on the Fantasyland side of the building. In colonial times, residents used bedpans that they would dump out their windows after a quick warning to pedestrians. Walk through the area and you’ll notice a pathway of drab, brown stone that represents this practice.

Buildings in the backstage of Magic Kingdom aren’t easily visible to park guests in order to preserve the movie magic. For this reason, Disney paints these structures in a “go-away-green” color that blends in with the foliage. As an exception, the buildings behind Splash Mountain are colored to match the attraction.

The cleanliness of the Magic Kingdom can mostly be attributed to the AVAC (Automated Vacuum Assisted Collection) system. At 13 different locations, the system sucks trash like a gigantic vacuum from sealed containers to one location backstage, where it’s removed. Trash cans closer to the AVAC entryways don’t have bags, because cast members can quickly dump waste into bins and transfer it to the system. Receptacles farther from AVAC require trash bags.

The Utilidoors is the first level of the Magic Kingdom, so those wandering through the park are actually on the second! Imagineers built the park on top of the Utilidoors using earth excavated from Seven Seas Lagoon. They planned a system to perform operational and backstage functions without disturbing the experience of park guests above them. Therefore, you don’t see maintenance vehicles riding through the streets or cast members from one setting strolling through another at the end of their shift. The Utilidoors function as the ultimate backstage.